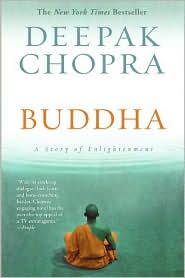 Deepak Chopra's 2007 book Buddha is a fictional account of the historical Buddha's personal formation. Chopra sectioned Buddha's life into three phases: Siddhartha the prince, Gautama the monk, and finally the enlightened Buddha. Chopra wanted to write a book to help counteract all of the miracles and wonders attached throughout the ages to Buddha's story. The essence of who the awakened one (the meaning of the word Buddha) was is what Chopra wanted to show in this book.

Before we could even begin to see the awakened one, a history of Buddha's formation as Siddhartha had to be understood. Comprising over fifty-percent of the book, this history took us from Buddha's birth to his decision to leave his father's palace as a young married prince. This section was grueling to read because much of it involved scheming and fighting involving Siddhartha, his father the king, a lower-caste friend, and a rival cousin. It was interesting to see the formation in this stage, however, because of examples like Chopra's description of Siddhartha's first experience of suffering: witnessing the mutilation of earthworms underneath a plow.

The power in Chopra's account of Buddha's formation came during the Gautama phase. A young prince left the comfort of home and began the harsh life of asceticism. Gautama wandered in the forest looking for teachers and dharmas. His mind was a sponge and soaked up any teaching he could find. This asceticism also led to zealotry, as Gautama went to the extremes to avoid attachments.

At first Gautama was worried that he was indulging himself, because no matter how austere the conditions, he love the life of austerity. Perhaps too much. He tried sitting in the snow for hours to see if he could make his body hurt so much that it would give up all hopes for pleasure. Day after day he repeated this, and then a miracle happened. Through the heavy falling snow he saw a stranger walking toward him. At first he was only a blurred dark shadow against the whiteness, but as came nearer, Gautama saw that it was not a man who had braved the storm but the god Krishna. He had the most serene and beautiful face; his skin was deep blue-purple that was all but black. (203)

This life of harsh self-denial brought Gautama to the brink of death, where he was discovered by a small girl who helped him back to health. Gautama the monk was transformed into the compassionate one known as Buddha. At this point, Buddha was able to begin a life of teaching how we all can live peacefully and mindfully with both our neighbors and ourselves.

Chopra's fictional account of Buddha's formation was, in my opinion, a significant contribution to his legacy. Some would say this book is not as good as Herman Hesse's Siddhartha. I would say that Chopra's book explored different angles of Buddha's life and teaching and it should not be compared on the same plane as Siddhartha.