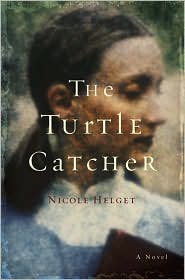 The first twenty-six pages of Nicole Helget’s The Turtle Catcher are so intense that you will find yourself gasping for air while reading them, having become so engrossed you forget to breathe. The book opens with the three remaining Richter boys pointing guns at Lester Sutter, the town’s “not quite right” guy, and demanding he walk into the middle of Spider Lake. They have filled his pockets with rocks and sewn them shut. They are killing him because of some impropriety between Lester and their sister Liesel who is, I guess, a hermaphrodite. Also, this all takes place in New Germany, Minnesota in 1920.

Holy crow, this novel does not mess around, and that’s just the first twenty-six pages. There are 262 other pages that follow.

After the stark brutality of the first four chapters we’re sent whizzing back in time to Bavaria, 1897. When I first saw that Bavaria header on the beginning of chapter five, I let out a howl of protest. I did not want to go back in time, I wanted to know what happened to Lester and Liesel next.

Instead of being a bratty reader, I should have trusted Helget. She’s a capable writer and with only the slightest of whimpers I followed where she led, from an unwed, pregnant girl in Bavaria to the new world of New Germany, Minnesota to the battlegrounds of WWI and back to Minnesota again, and I enjoyed every minute of it.

Damn. I’m having a hard time writing about this book. This is one of those I enjoyed so much I have a hard time saying anything other than, “I liked it because it was good.”

The story of the struggling Richter family feels at turns very real and genuine and at other points fantastic. There is a thin thread of magical realism woven throughout the story of these stoic Southern-Minnesota farmers that makes you pause to consider what you just read. Is Lester dead? Is Magdalena haunting her former lover?

What I loved so much about this book is that even though it takes place in turn of the century Minnesota, the issues the Richters struggle with are timeless. There’s a father trying to do what is best for his family despite what the neighbors think; a headstrong boy trying to find his own voice and rebelling; a handsome young man looking for a good time no matter what grief it brings; and a young girl ashamed of her body and unsure of how to make her way in the world where she doesn’t quite fit.

Besides the fabulous Richter family, Helget populates the novel with a bunch of minor characters who are just as interesting as the stars of the book. There’s the Sutters led by an abusive, alcoholic father, nurtured by an eldest sister who takes on the role of care-giver to her myriad siblings, and in the middle of them all is poor, poor not right Lester made goofy by the raging fists of his father. Then there’s Magdalena’s sister Frieda, a forward-thinking feminist who spirited her pregnant sister out of Bavaria and landed them in Minnesota, promptly getting them both proper husbands. While Magdalena became a farmer’s wife, Frieda married the editor of the local German-language newspaper (Wilhelm’s brother) and spends the rest of the book crusading for a more tolerant New Germany. She is awesome.

See, the trouble for the Richters really starts brewing when WWI breaks out and they have to deal with the anti-German sentiments of the state government in St. Paul as well as the ill will and jealousy of their neighbors.

Bah! I’m at 600 words already and I have yet to get to that magical mix of stoicism and magic that make this story so engaging, so compelling, and some how beautiful in it’s unemotional portrayal of life in Minnesota.

I’m back to I liked it, because it’s good. It is good.