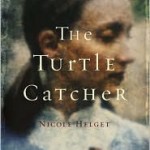 Nicole Helget is the author of the memoir The Summer of Ordinary Ways (which I haven’t read), and her first novel, The Turtle Catcher, was released in February by Owen Houghton Mifflin Harcourt.

It’s a stark, brutal, beautiful novel set in Southern Minnesota during the (mostly) during WWI (my full review). The first chapter of The Turtle Catcher won Minnesota Monthly’s Tamarack Award in 2005, you can read it here. Helget teaches writing in Mankato where she lives with her husband and five children.

What book(s) are you currently reading?
The Brief Wondrous Life of Oscar Wao by Junot Diaz.

Have you ever had a crush on a fictional character? Who?
Not really. I’ve had crushes on authors, though. Ernest Hemingway, William Faulkner, Harry Crews, Tim O’Brien, and, most importantly, my own husband Nate LeBoutillier, who wrote a short story called “The Sheila Ryker Guarantee,” which was published in CutBank many years ago.

If your favorite author came to Minnesota, who would it be and what bar would you take him/her to?
If Harry Crews, Tim O’Brien, Nate and I could meet up at Spinners Bar in lower North Mankato some evening, it would seem to me that all was right in the universe.

What was your first favorite book?
Les Miserable by Victor Hugo.

Let’s say Fahrenheit 451 comes to life, which book would you become in order to save it from annihilation?
Leaves of Grass by Walt Whitman.

What is one book you haven’t read but want to read before you die?
Don Quixote, I guess.