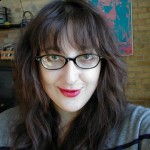 Amy Abts joins MN Reads after being suckered into it by Christa (or something like that, I like to imagine it took some cajoling and lots of pretty please with sugar on tops). Amy’s worked at a bookstore for the past ten years and reads two to three books a week. She said she reads fiction and short stories are the most, but also enjoys a good biography or history book. She has a BFA in Acting and hope someday to purse a graduate degree in library science. Look for Amy’s reviews to start popping up soon.

What book(s) are you currently reading?
I am currently nearing the end of Margaret George’s Memoirs of Cleopatra. Then I’m onto The End of Alice by A.M. Homes, and after that, Lowboy by John Wray.

Have you ever had a crush on a fictional character? Who?
Oh yeah. Usually detectives from British mystery novels.

If your favorite author came to Minnesota, who would it be and what bar would you take him/her to?
Living author? Dead, I would pick Raymond Carver. He was an alcoholic so that works. I would take him to the Kum on In in West Duluth with it’s cool wood portraits of the lumber mills in past years. Hopefully we wouldn’t get beat up. Living? Maybe Michelle Tea, she would be so fun to hang with. We might just kick it old school, drinking on the stoop of my building.

What was your first favorite book?
Black Beauty by Anna Sewell. I was a kid!

Let’s say Fahrenheit 451 comes to life, which book would you become in order to save it from annihilation?
Lipstick Traces by Greil Marcus.

What is one book you haven’t read but want to read before you die?
Brothers Karamazov. I’ve heard so many things about it but never get around to reading it.