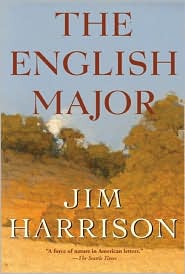 I’m the type of reader who doesn’t often read reviews of books that I want to read. I read all kinds of reviews of books that I’ve never even heard of, but if the book is on my list I wait until after I’ve finished it to read any reviews. This nearly killed me a few months back when I was reading Philip Roth’s Indignation and saw that David Gates had written a review of it for the NY Times.

The same can be said for Jim Harrison’s The English Major. Even though I’d never heard of the book the minute I read the subhead on a LA Times review from October I knew I had to read it. The subhead said this:

A failed marriage sends a middle-aged English teacher off in search of something better — a wide-open highway, a cabin with 40 acres and making love to a waitress who smells like food.

The English Major has the kind of charm that only men over 55 who are a bit in their cups have. It’s a little rambling and full of stuff that you would never have asked about but still want to know.

This is a story about 60something Cliff who gave up a career as a high school English teacher to work on his wife’s Michigan cherry farm. After many, many decades of marriage Vivian, Cliff’s wife, decides to leave him for her high school sweetheart (during her high school reunion Viv goes for a walk with this sweetheart and returns with grass stains on her knees). Because of the divorce she sells the farm and splits the money with her mom and her son, leaving Cliff with a small nest egg to retire on.

Instead of moseying off to some senior high rise or something, Cliff packs up his car and heads off on a cross-country road trip. He decides he’s going to visit all 48 states (he’s afraid of flying, and I can’t remember if that dismisses Alaska or just Hawaii), starting by visiting his grown son who lives in San Francisco. On his way to Montana, Cliff hooks up with a former student of his a forty-three-year-old housewife named Marybelle. And I mean hook up in all senses of the phrase.

Cliff’s randiness brings a lot of the book’s humor. At times he seems to think and act like a seventeen-year-old which is both annoying and charming, like it is in teenage boys. While it seems that Cliff hit the hootchymama jackpot Marybelle proves to be more annoyance than godsend, and we spend a lot of time watching Cliff not deal very well with her while simultaneously mourning the love of his life (Lola, his dog, not Vivian) and the end of his marriage.

This isn’t a tender tribute to growing old gracefully or a misty-colored reflection on a life lived. Hell no, Cliff’s still got a lot in him and is wrestling with the same kinds of things we all do (did I make the right choice, what’s it all mean, how can I leave my mark on this world, when am I ever gonna get laid?). But since Cliff is coming at it from the perspective of a 60-year-old man it’s much more entertaining than your usual 20-30something angst bullshit.