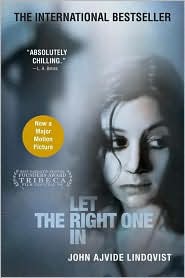 I read an interview with Stephenie Meyer, writer of the Twilight series, where she said something about how she had taken liberties with the classic vampire story because she was writing fiction and there are no hard-fast rules about what vampires can or cannot do. So she did things like make their skin glimmer in the sunlight.

This is a laughable about of liberty — not to mention creativity — considering what John Ajvide Lindqvist has done with the vampire of his novel Let The Right One In.

Oskar is a loner, whose relationship with his classmates has him on the creepy serial killer fast track. Then he meets Eli, a waify, smelly girl who is seemingly his age who lives in his seedy Swedish apartment complex, and they forge a tentative friendship — typing Morse code messages on the shared wall of their bedrooms, naked spooning, and solving Rubik’s Cubes. Eli’s fatherish sort of person is a pedophile, who kills people and drains their blood so Eli can eat lunch. Although sometimes she just goes out on her own, drops from a tree, and mauls a victim herself. In a sort of nod to Melrose Place, the apartment complex also houses a drunk posse of friends — one of whom Eli treats like a Snackable — who are trying to make sense of the deaths while negotiating a deep fog of the drink.

In some ways this book was a lot like the Tami Hoag novel you buy spontaneously while waiting for some blue hair in front of you to organize her cat food coupons at the grocery store. Other times, particularly the parts involving Eli and Oskar, or even just Eli in kill-kill-kill mode, are really amazing in the way they show the hunger for simple needs like love and food. And then there are a handful of side plots that add to the bulk and maybe are necessary in order to give everyone a face and back story, but unnecessary because of the added bulk: Tommy, who lives in the complex, is struggling with accepting his mother’s new boyfriend; One of Oskar’s bullies wants to learn more about his father.

A small section of the book is written from the perspective of a squirrel. There are battles against the undead that read like something out of a Batman script. Lindqvist switches gender pronouns for Eli midway through the book. That alone trumps Twilight.

Overall, this was an enjoyable read, more of a “huh” than a “meh” on my personal Richter Scale, but hardly anything that deserves an exclamation point. I liked these flawed and messy characters — specifically Oskar and Eli — who don’t have an ounce of cliche. Although, I’m not sure how it got so long: my soft cover version has 471 pages. I can’t wait to see this movie.

NOTE: I didn’t know this book existed — although I knew about the movie — until I read about it in the comments on Jodi’s site. I immediately cast aside a McInerney to read this. Hmm … Vampires.