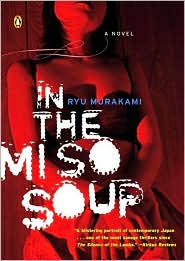 In The Miso Soup by Ryu Murakami is not the kind of book that you bring home to meet your parents. It is lurid. It is frightening. It is unpredictable. Murakami plucked ordinary words out of nowhere and arranged them into a simple, matter-of-fact horror. Like a smiling child with a box of crayons, humming the Dora the Explorer theme song, then showing you a crudely drawn crime scene with headless chickens and bloody axes and dead parents.

It is a delicious read.

Kenji has the slightly illegal job of guiding tourists through Japan’s underground night life. He knows where to find peep shows, lap dances, sex, and places where teenage girls are paid to just talk to men. He is hired by Frank, an American, for a three-night job ending on New Year’s Eve. Kenji is immediately on alert around his client, who always seems to be lying, who’s skin seems cold and plastic, who occasionally gets a dark and violent look in his eyes. The news is filled with the story of a Japanese school girl known for “selling it” who was found dismembered. Kenji senses that Frank was involved.

After their first night together, Kenji wakes to news that a homeless man was found burned to death. And when he leaves his house, Kenji finds a postage-sized stamp of something he believes is charred skin stuck to his door. Frank.

This is such a great book. While I always carry a book in my purse, this is the first time in a long time that I pulled it out for quick reads while walking through the skyway and waiting in line at Subway. And when a Jehovah’s Witness tried to hand me a pamphlet when I was face deep in the muck, I chuckled and wondered what he would think if he could see the words I was reading at that moment.

There is a full-on mass murder scene midway through this book that is written so easily and so visually that I gagged. For instance “… Seeing the throat yawn open like the hood of a car.” I love books that affect me physically. Like in The Gargoyle when my legs went numb reading about the main character’s burning flesh. I guess my favorite genre would have to be “stuff that makes me want to barf.”

I first read a book by Ryu Murakami when I was taking an international fiction class in college. I remember little from Almost Transparent Blue beyond sex, drugs and cockroaches. Although I believe that the cockroaches were actually the cleanest part of that trifecta. I remember being stunned by the book. Liking it, but being shocked. I had never read anything like it and 10 years later it is still stuck in my head. I’m not sure why I never doubled back to read more by Ryu Murakami. That is about to change.