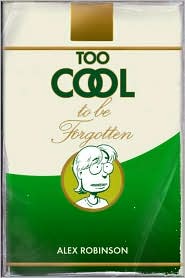 Too Cool to be Forgotten is a slender little graphic novel by Alex Robinson about Andy Wicks and his inability to quite smoking. Andy, 37, has tried everything he can think of to quit smoking. After years of failure he tries hypnosis at the urging of his wife.

Andy’s not so keen on this method, but goes for it anyway. Once the hypnosis is underway Andy finds himself transported back in time to 1985, a few days before he smoked his first cigarette. Andy, ever the smartie-pants decides that it’s his mission to redo things and not take that first puff, thus curing himself of the smoking curse.

So we follow Andy, a 37 year old trapped in his own 15-year-old body around for a week. Fifteen-year-old Andy is kind of a nerd, of course, and we get to see him deal with teen angst using the knowledge he has a 30something. Hrmmm.

While the book is amusing enough, Andy likable enough, and the story engrossing enough, all together it’s just not enough. There weren’t any keen insights on growing up nerdy, no real revelations, and the climax could be seen coming about a mile away. It all felt a little sit-com-like. I feel as though the story featured the standard characters facing a mild, wacky problem that could be easily taken care of in thirty or so minutes.

This is one of those books that is nice. It’s not going to keep you up at night. You aren’t going to skip meals and social events to read it, but it’s not a bad way to spend a few hours.

My favorite part, sadly, was a sort of editor’s note at the very end about what seemed like a typo (one that made me roll my eyes) but what was, in fact, “intentional on the part of Mr. Robinson. The publishers and proofreaders wish to note their opposition to including such grammatically awkward and heavy handed foreshadowing. . .”

So awesome. So awesome in fact, that it makes me want to read every book that Top Shelf produces.