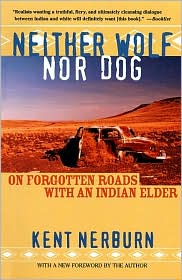 Kent Nerburn?s Neither Wolf Nor Dog is the 1994 account of a journey he took from his Bemidji home to the Black Hills of western South Dakota. This journey started when an Indian elder named Dan summoned Nerburn, to write a book for him. This book was to contain Dan?s intimate thoughts and feelings that have been stewing inside of him his entire life. What actually ensued in this book was an education on Indian life and thought for both Nerburn and the reader. This education came via Dan?s speeches to Nerburn about the past and present, Nerburn?s loose tongue, and an intimate ritual at the site of the Wounded Knee murders where Nerburn finally started to awaken to what Dan was trying to teach him.

I am having a difficult time trying to figure out what to say about this book. I feel that the words I use to talk about its contents may not do it justice. There were so many tough ideas Dan confronted Nerburn with on this journey: white people pretending to be Indians, white ideas about Indians being either savages or perpetual sources of wisdom, perceptions of time, history, and relations were just a few. The ideas and issues Dan talked about in this book are important and valuable. As a white person, I feel what I need to do here is allow Dan?s voice to come through in the book, rather than offer up my own analysis and interpretation.

?You see, we could always read the signs. We still can today. You may not be coming with guns and diseases, but you are coming. Instead of alcohol and tobacco, you are bringing money. You don?t want our land. You want what is under our land and on our land. You want our minerals. You want our forests. You want to bury nuclear waste and chemicals. ?Ha!? he burst out suddenly, as if his words were only the tip of his thoughts. ?But we have learned to be clever. We know that the only thing you really fear is lawyers, because lawyers are the ones who can twist your law. Once, long ago, we believed in the power of your law. But then we saw that you didn?t believe in it. It was only for you and it really was only to help you get what you want or to keep others from getting what you have. It never applied to people like us. (219)

This is just a small excerpt from the many talks Dan gave to Nerburn during the long drive from Minnesota to western South Dakota. There were also many tense moments when either Nerburn took offense to what Dan was saying or he became frustrated at both his lack of understanding and control of the journey. There were also many moments where Nerburn simply talked when he should have remained silent. These teaching moments allow readers to learn from the difficult experiences of others.