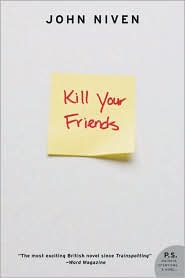 John Niven is what would happen if Nick Hornby got into a terrible car crash and punctured the lobe where politeness lives. I had a heck of a time getting into his novel Kill Your Friends, since I’m not exactly fluent in vitriol. It is pages and pages of a man angrily screaming British slang for cocaine in your face, spit foaming at the corners of his mouth.

Steven Stelfox is an A&R dude negotiating the Brit pop scene in the 1990s.? It’s a cruel, cruel place where everyone is trying to find the next big thing. The young sexy girl singer, the song that resonates with clubbers, the reimagining of the Spice Girls, or those croony Emo “artists.” When things don’t go his way, Steven may do something like hammer away at a colleague’s brain with a baseball bat, but only after his first murderous attempt fails: the one where he tries to overdose the guy, then plugs his orifices with all sorts of embarrassing things.

Stelfox is a moral contortionist, and lots of other -ists: racist, sexist, elitist. As I got used to his voice, the book improved just enough to keep reading. Eventually I was enjoying his clever, albeit repetitious, and evil tirades:

“The laughter and smiles of the executives is brittle and plastic; we’ve done this so many times, often for bands and singers who turn out to be about as commercial as tooth-kind drinkable HIV for children.”

“They’re all good little capitalists at heart, bands. Even Thom fucking Yorke, when he’s not crying about what kind of coffee beans you should be using so some cunt in Outer Mongolia can afford to put an inside toilet in his filthy gaff, even he’s wondering what the marketing spend is looking like.”

People are funny when they are mad. But it’s an easy kind of funny.