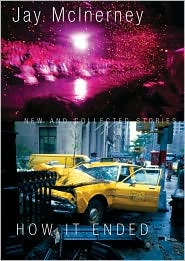 In Jay McInerney’s world, men are writers with varying degrees of success. They are married to women who are pregnant, which may or may not stall their philandering. The wife typically knows what’s up and either ignores it, aborts the child, or asks the man to have his fairly healthy cat put to sleep as contrition. There is typically a back story salted with cocaine residue and lapsed Catholicism. His newer stories always reference 9/11 in some capacity.

In Jay McInerney’s world, no one leaves New York City. Maybe a character spent time in China modeling or teaching English, or maybe there was a stint in Los Angeles. But home is Manhattan, and now that McInerney has gotten older, he’ll concede to characters with suburban addresses. But never the main characters.

How It Ended: New And Collected Stories reads a bit like a posthumous compilation. It is a mix of snippets of his old stuff — including pieces from “Bright Lights, Big City,” “Brightness Falls,” and “Model Behavior.” This is fun and feels like reading an old yearbook. It has been years since I’ve read any of his novels, and it was a nice reminder of whats-so-big-about-McInerney. [Namely, that he writes about a time and place that I’d love to vacation in: New York City. 1980s. Writer cliques.]

Then he attempts to one-up the masterful feat that is “The Good Life” — in which, 20 years after “Brightness Falls,” he revisits the main characters Corrine and Russell — and has them aged appropriately — in the immediate aftermath of 9/11. In this compilation, he has a short story where Corrine runs into the character Luke from “The Good Life.” Here, in the short story “The March,” it seems a forced and pointless exercise. Hopefully the kind of thing that will show McInerney that if he wants another novel about Corrine and Russell, he should wait at least another decade.

McInerney also doubles back to Alison Poole, the star of “The Story Of My Life,” who last year was outed as a character based on the woman who would become John Edwards’ mistress. Here, in “Penelope on the Pond,” Poole is hiding out from the press in an upscale hunting shack, waiting for text messages and phone calls from Tom, her married lover who is involved in politics. In novel form, “The Story Of My Life” McInerney does a bang up job of capturing the voice of an insecure 20 year old with expensive taste, daddy issues and financial problems. The fast-forward has dulled her a bit, although, admittedly, by the time most women hit 40, up-talking and “like” dropping taper off. And this Alison Poole has wizened up a bit, but isn’t interesting enough to check in on, ironically enough considering the recent-ish tabloid coverage of her likeness.

Each of the stories seems a touch autobiographical. One finds four brothers, after the death of their mother, beating the shit out of each other at Thanksgiving. One brother is a playwright, whose recent play has the entire family wondering whether their mother had an affair with their father’s best friend. Another has a man and his wife sharing their bed with a pet pig. The man only recognizing this as ridiculous when he is removed from it and sharing the story with a therapist. In another, an aged Lothario is about to get married. First he has some unfinished business with four lines of cocaine, cut with his Soho Club card, and an exlover looking for closure.

It should be said: That McInerney continues to write about men for whom fidelity is a phase that only lasts until the vet’s assistant slips the character her phone number. It’s a little like watching a middle-aged man navigate the produce department in his high school letter jacket. Saying “Oh, yeah?” to the kid bagging his groceries. “You shoulda seen the model I bagged in ’87.” But I’m a bit like a former cheerleader from that very same high school, who would see McInerney squeezing tomatoes and become dazed. Then immediately text my best friend: “OMG, just saw j-mac at the GS.”