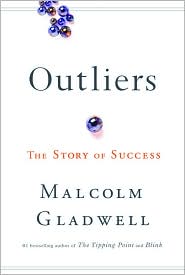 I’m pretty late to the Malcolm Gladwell fanclub, but after reading Outliers I feel pretty nicely ensconced. It’s not often that I read non-fiction, I tend to find it a little dry and too teachy. While there’s a lot to learn from Outliers, the writing is so conversational and smooth that you feel like you’re being talked to rather than lectured.

The basic premise that Gladwell sets out to prove is that genius is not based solely on rugged individualism, but that situations and opportunities play a large role. For instance, did you know that something like 40% of the top youth hockey players in Canada were born in January, February, or March? Weird, eh?

It’s because the cutoff birthday for youth hockey is January 1st, so the kids born in the first three months of the year are a little bit bigger and stronger than the rest of the kids. This gave them just enough of an advantage over other kids to put them on the better teams and get them better coaching.

Gladwell explains how it all works, and uses other examples to explain how genius is perhaps not just some sort of divine, mystical gift. While he doesn’t completely undermine the value of hard work and an individual’s strive to succeed, he just wants to point out that there are more factors at play here. I’d go into them all, but it seems way more trivial and pointless when you simplify it into a few summary sentences.

What I will tell you, however, is that this is the kind of book that as you read it you want to share all your new knowledge with everyone you know, just so they you can say, “I know, weird, right?”