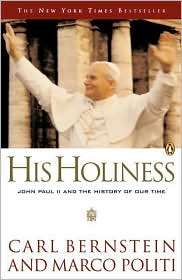 His Holiness, by Carl Bernstein and Marco Politi, is the third biography I have read on John Paul II (JPII), the former leader of the Roman Catholic Church (Garry O'Connor's Universal Father and George Weigel's Witness to Hope were the other two). Weigel's book, a 1056 page behemoth complete with two sections of color pictures, is often held up as the gold standard of JPII biographies because of its depth on both the pope's life and his spiritual framework. O'Connor's book was just okay in my opinion, providing a condensed and somewhat sterile version of both JPII's life and religious thought.

When I started to read His Holiness, I had Weigel's book in the back of my mind as the premier book on JPII. What I was hoping for, and what Bernstein & Politi provided, was something new and interesting about JPII. Being a Catholic theologian and a senior fellow at the somewhat right-leaning Ethics and Public Policy Center, Weigel was somewhat biased in his biography on JPII and did not do much to show any criticism of the former pontiff. One would think, after reading Weigel's book, that JPII was the most brilliant pope ever to lead the church since St. Peter.

What Bernstein & Politi did was offer some balance to my view of JPII via that wonderful world of journalism. His Holiness is a thorough analysis of JPII's life from his birth in 1920 until 1996. By not wearing the Catholic-colored glasses used by Weigel, Bernstein & Politi were able to show some moments in JPII's life were he might not have been at his best, thus giving the reader some honest perspective.

This perspective really came into play when the pope's life in the 1990s is considered. Throughout much of the pope's life, he was dealing with the Soviet brand of communism found in both his home country of Poland and throughout much of Eastern Europe. After the fall Soviet-style communism in the late 1980s, the pope's energy and focus shifted to other areas of human life, including such hot-button issues like abortion and the role of women. Weigel portrayed the pope as the noble bearer of Catholic truth (not my personal theological belief), whereas Bernstein & Politi portrayed JPII as perhaps the strict traditionalist and conservative he probably was during his papacy.

An excellent example of this dichotomy was a 1994 meeting JPII had with Dr. Nafis Sadik, the head of the United Nations Fund for Population Activities. The occasion for their meeting was the United Nations International Conference on Population and Development (ICPD) held in Cairo, Egypt. The issue at stake was the proposed recognition by the United Nations of a person's completely unrestricted right to have an abortion, an idea that is counter to Roman Catholic doctrine. Weigel devoted approximately one half of a page to this meeting. Here is how Weigel portrayed Sadik: “Mrs. Sadik's conclusion about her forty-minute discussion with John Paul-'He does not like women. I expected a little more sympathy for the suffering and death-' was simply bizarre” (719). Contrasting this was his depiction of JPII: “John Paul gave her a lengthy memorandum of objections to the Cairo draft document, and tried, as he said later, to explain to her the Church's teaching: 'She didn't want to discuss it'” (718).

However, Sadik did want to discuss the matter at hand, to which Bernstein & Politi offered five and a half pages of discussion to back it up. Here is an excerpt that is particularly telling:

She spoke to him about the approximately 200,000 women who die every year from self-induced abortions-a major health issue: “Religious leaders-and all of us, really-must address this very important issue.”

“Don't you think,” John Paul II interjected, “that the irresponsible behavior of men is caused by women?” (521)

Bernstein & Politi offered some objectivity that is lacking with Weigel. However, this objectivity was quickly whittled away by Weigel's ability to understand JPII's spiritual identity and bring it out in writing. Bernstein & Politi failed miserably to present the spiritual aspect of JPII. Instead, Bernstein & Politi wrote long chapters about the failure of Soviet communism and JPII's contribution in that failure. While this is important in understanding JPII as a whole, Bernstein and Politi went into so much detail, that JPII's name was often missing amidst the history and connection of the Soviet Union, United States, Poland, and the Vatican.

I believe Weigel's book is far superior to Bernstein & Politi's book. Weigel, while not as objective, offered far more information and tended to stay focused on JPII, rather than wander off into other matters. However, Bernstein & Politi went to a place Weigel did not go: showing blatant ignorance. Bernstein & Politi said the following about JPII's trip to Auschwitz in 1979: “For the first time ever a Roman pontiff was going to render homage to the victims of the Holocaust, to all the victims of Nazi persecution, entering the place to which the wartime pope, Pius XII, had closed his eyes” (227).

I wrote a paper for my religion research course on Pius XII. While Pius XII could have done more (along with many leaders of that time), he certainly did not just close his eyes. If one did even a modest amount of honest research, this would become evident.