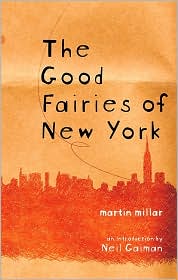 Indescribable and hard to put down, Martin Millar's novel is complex and witty with a sharp edge of social consciousness. Perhaps Neil Gaiman described it most accurately in his introduction. “This has to do with other fairies (of all nationalities) of New York, not to mention the poor repressed fairies of Britain? It has a war in it, and a most unusual production of Shakespeare's 'A Midsummer Night's Dream' and Johnny Thunders' New York Dolls guitar solos.”

Add to Gaiman's description a prized triple-bloom poppy, a magical Chinese mirror, a shape-changing violin, and you have still only touched on the plot-line. Simply put, this is a love story; well-written and rich with twists, but at the heart a story about unlikely romance.

'You are in love with Kerry.'
'Don't be ridiculous,' snorted Dinnie.
'I'm not being ridiculous. I saw you blush, stammer and walk away in the wrong direction after she said hello. You can't fool a fairy about this sort of thing.'
'Well, Dinnie, this is your lucky day. Bringing lovers together is a particular specialty of mine.' ”
-pg 71-72

At the center of this comedy of errors are two outcast Scottish fairies, Morag MacPherson, and Heather MacKintosh. After a potent mix of magic mushrooms and whiskey, they accidentally end up in New York and befriend humans Dinnie and Kerry. 'Good Fairies' is slightly a stretch for the less-than-benevolent Scottish pair. Morag and Heather can out-party Mick Jagger any day of the week and are the cause of exquisite chaos in both fairy and human realms of New York.

“Unable to sleep, Morag rose and determined to free the lobsters.
'Poor little things.'
?
'And what exactly do you think you're doing robbing a restaurant on our patch?' demanded a voice behind her. Morag whirled round, and found to her great surprise that there was a very angry-looking fairy with yellow skin glowering at her.
Morag fled.”
-pg 40

Nothing is too crazy or unexpected for the fairies to meddle with, including making a love match out of Dinnie and Kerry. Mean-spirited loner Dinnie is not the perfect choice for emphatic and lovable flower-child Kerry. The characters are written with enough dimensions, though that with the help of the fairies and fate, this mismatched pair may have a chance.

This book has the rare scope of fantasy that delicately blends the absurdness of life with the delicate moments; you may even suspect some fairy magic trapped between the pages of catching your imagination. The Good Fairies of New York is an enchanting read.