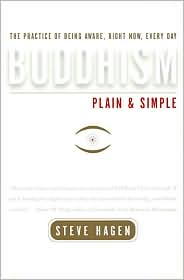 Minneapolis' own Steve Hagen wrote Buddhism Plain & Simple in 1997 to provide an overview of the religion that was free of “the fetters and cultural trappings that have accumulated over twenty-five centuries” (5).

Buddhism Plain & Simple did live up to its name. Throughout the book, Hagen made it evident that Buddhism is about being awake in the present moment. Hagen said, “Our journey must be two awaken here and now, to awaken to here and now. To be fully alive, we must be fully present” (19). To do this, Hagen examined the human situation of suffering, gave ways to wake up, and showed the benefits of having a free mind.

To be awake is to see reality as a whole in the present sense. Seeing the wholeness of reality releases us from living by in the bondage of duality. Here is an example of this thinking:

Just as we conceive of a self and counter this notion with a non-self, so also are we taken in by another set of opposing concepts-existence and non-existence. We get repeatedly caught in this duality, unwilling to see that, like self and not-self, both are phantoms created by consciousness. These concepts (like any concept) simply don't capture Reality. (135)

When we are caught up in concepts, we end up not seeing reality. Instead, we cling to our notions of what we think is truth. This clinging is a source of suffering.

This picture, similar to one like it on page 144, is a visual lesson in clinging to notions. Is the line concave or convex? As drawn, someone may believe he or she is justified in saying it is concave. However, if you flip the drawing 180?, it is then convex. If we endorse one position, we are leaving out the other.

The awakened person sees it as neither concave nor convex. This position may be uncomfortable because it takes one out of the seemingly comfortable realm of duality and into the ambiguous world of wholeness. At first, it may seem unsettling to live in a world of gray, a place where you cannot categorize and analyze. However, to be awake in the present moment's reality is to see the world mindfully. After living mindfully, one experiences both enlightenment and peace.

Speaking of mindfulness brings us to the teachings of Thich Nhat Hanh, to which Hagen referenced a few times in this book. Here is an example of mindfully looking at the very book I am writing about in this review.

Thich Nhat Hanh, the prominent Vietnamese Zen master, would remind us that this book is not merely this book, it is the sun as well. After all, if not for the sun, trees would not grow to produce the pulp to make paper. And we cannot forget Ts'ai Lun, who invented paper in the second century, or Johann Gutenberg, who found a way to apply movable type to a printing press in the fifteenth century, or the teams of people who invented and programmed my computer, or the people who taught their teachers.

And intermixed with the trees and the sun and creative human minds are other things. We cannot ignore language, time, soil, plants, animals, emotions, or thoughts. We cannot forget the rain, or even the stars, or the galaxies of stars. Indeed, there is nothing we can point to, or even imagine, that does not find its way into this book either by thought or material.