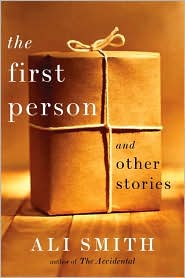 I can’t remember if this is the year that we proclaim the death of the novel or if it’s the short story that’s supposed to be dead. Maybe it’s fiction in general, or publishing specifically. It’s hard to keep up with all the death knells. So depending on what’s supposed to be dead at the moment, Ali Smith’s collection The First Person and Other Stories is either a blazing celebration of the short story or a tender eulogy.

Here’s the thing with Ali Smith (at least the thing according to me now that I’ve read two of her books), she’s a seductress. She lures you into her stories with sweet baubles and shiny gumdrops. You are comfortable, it is nice, things are going well, and the sun is out. But then when you aren’t paying attention, Smith kicks you in the back of the knee leaving you a little wounded, more alert, and wondering what the fuck just happened.

It sounds more violent than it is. Really it’s just a warning that you have to be aware of your surroundings at all times or you’re going to get lost. Ali Smith’s stories are not easy, but they are (most often) rewarding.

What I liked so much about this collection is that Smith kind of offers up a sort of apology/excuse/justification for the book and short stories in general (this comes after calling the novel a fat, old whore):

Smith’s stories are slippy, slidey nymphs and it’s tough to not just pin down what they’re about, but even what the hell went on.

There’s a story about a writer who goes into cafes and eavesdrops on people, the writer has a friend dying of cancer, and they talk about books. It doesn’t sound like much but it was my favorite story in the collection.

There’s another story about a woman who finds an abandoned baby in a grocery cart and is forced to take him home when the baby starts calling him mom. Once they get in the car the baby offers all kinds of crazy critiques of the woman’s life.

There are a lot of stories about a you and an I — when our relationship began, when it got bad, when it was over, and when we decided to get back together again. These are perhaps the most challenging stories and while most of them work in the end, I have to admit I stopped reading one because the “You, you say” every other line was driving me fucking batty.

As is often said, short stories are written about moments (whereas novels are about everything). This is how I judge stories, by how many of the moments I remember after I’ve finished the story. By my count Smith’s collection left me with between 8-12 memorable moments, which isn’t too shabby in a collection with twelve stories.