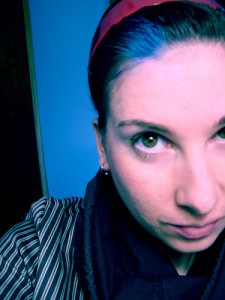 If ever MN Reads had a kindred spirit in another website, it would be Minnesota Microphone by Cole Sarar. Minnesota Microphone is a blog dedicated to celebrating and promoting Minnesota’s spoken word scene. Cole started the site because she had no luck trying to figure out when open mics, readings, and things like that were happening. She couldn’t find anything online so she took matters into her own hands.

The idea for the site, Cole said, is to have a centralized calendar, a place to discuss what’s going on, promote upcoming events, and to show photos and videos of recent performances. It’s a way to entice people who might otherwise be turned off by the “slam poetry” stigma into giving it a chance, she said. Minnesota Microphone is a place to challenge the performers to think about their writing, think about their performances. Cole, who performs under the name Inky, will be celebrating her own slamiversary on Valentine’s Day, and is the reigning Geek Slam champ. She’ll be representing Minneapolis at the Women of the World poetry slam in Detroit and performing at “That’s What She Said” at The Local on February 25th.

What book(s) are you currently reading?
I’m doing that awful thing I sometimes do, where I’m reading four books at once. I started The Making of a Poem by Mark Strand and Evan Boland back in December, because I was really beginning to rue my ignorance to poetic forms. It’s a really excellent educational piece — discusses the history of each form, what sort of context the form came from, etc., as well as supplying examples that they go through and discuss at length. I somehow managed to skip taking a class on poetry in high school or college — never really thought it would be something important to me later. I’m also reading 100 Selected Poems of e. e. cummings’ work. Just as I didn’t really study poetic forms, I’ve got a lot of poets that escaped my study, and I feel like now is the exact right time in my life to “get” what’s going on. Book three is Julio Cortazar’s Hopscotch, which I am SO excited about. I’ve read a lot of Cortazar’s short stories, and love that dense style and the liminal space his stories tread between realism and speculative fiction. I had no idea that there were two ways to read the book when I bought it or when I grabbed it to take along on this trip. I started it on the bus ride to Chicago, and I’m almost tempted to skip out on adventuring to read more. And finally, the book I’m struggling with most is Knitting on the Edge by Nicky Epstein. I get a lot of it conceptually, but it’s still over my head in terms of knitting skills.

Have you ever had a crush on a fictional character? Who?
Norah Labiner’s Miniatures has a character who is exactly my type. Newton Graves would break my heart ten times over. Most other fictional characters I’d rather be than be in love with.

If your favorite author came to Minnesota, who would it be and what bar would you take him/her to?
We’ll pretend that Calvino is still alive. I like going to the Town Talk when I want drinks and conversation- all of my other bars are too too loud. I like sitting at the bar with a friend and watching the parade of folks coming through or sitting next to us.

What was your first favorite book?
My very first? Probably Runaway Bunny. The Illustrations are so beautiful and the interchange reminds me of the interchanges my folks and I had at a young age. “What if I x?” “Then I’d y.” No limitations on imagination.

Let’s say Fahrenheit 451 comes to life, which book would you become in order to save it from annihilation?
Yikes. That’s so so so hard. I had to check what books were already being saved by your other interviewees and it’s still making me anxious to just pick one book to save. Frankenstein, probably? It’s so beautifully written, and such an important book.

What is one book you haven’t read but want to read before you die?
Ulysses. I’m daunted. I was working myself through Joyce’s works and a purse I had Portrait of the Artist in got stolen. It had the perfect combination of footnotes and editor’s comments, and I don’t know what it was, and haven’t returned to Joyce since.