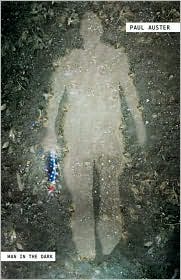 August Brill can’t sleep. Since his car accident, he can’t walk very well. His wife recently died. He’s living with his daughter, whose husband recently left her, and his granddaughter, whose boyfriend was beheaded by terrorists for a live audience. Clips are available online.

If August Brill has to pee in the middle of the night, it is easier for him to just go into a bottle, rather than fumble around looking for his cane.

Man in the Dark by Paul Auster spans one sleepless night in this house of doom and gloom. The former book critic spends the night thinking: first he makes up a story in his head, and begins it by sticking his main character in a hole. Then he sends the man through time dimensions, to a place where the United States is at war with itself, and 9/11 never happened. His character has been chosen to kill August Brill.

While August Brill is creating this story, he is thinking of other things: the films he watches with his granddaughter to pass the time, the complicated love story he had with his wife, the stories other people have told him. At some point in the night, his granddaughter crawls into bed with him and they share the parts of their history that they are ashamed of.

In some ways, this novel feels very incomplete. Like it was just a series of thoughts Auster had, but didn’t feel like following up on. Like he pulled out his index cards filled with scribbled ideas and put them in one book. And it is set in this weird time frame where all the bad has happened, and the characters are just about to begin living again. It’s a nice little story, but it feels like eating mashed potatoes for lunch: Tastes delicious, but I needed something more.