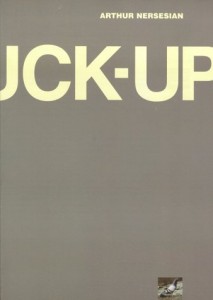 Let’s call this epidemic “runaway book.” This is where I begin reading something funny. I’m dog-earring pages like crazy. A writer’s voice is so clever and sassy that I start to imagine that my own word document privileges should be revoked.

And then, runaway book. This time, I actually felt my heart sink. I meant to mark the exact spot where it happened, in the latter fourth of The Fuck-Up by Arthur Nersesian, but now I can’t find it. I suspect it was around the part where the main character was getting annihilated at a literati party, or when he was eluding captors by climbing down fire escapes, over barbed wire fences and then cramming fistfuls of garbage down his throat for dinner.

You lost me, Nersesian. You really lost me.

I see this problem in a lot of novels. Particularly “edgy” novels. “Cult Classics” and whatnot. A writer starts out sprinting, with one liners zipping all over the place. Then things get dizzy. Like the writer isn’t enough in control of himself [and it’s always a himself] and can’t figure out how to continue being funny without crashing his plot nose first into Cirque du Soleil. I think it is a thing where a writer builds half of a story around some clever turns, and then is like “Oh. Now what?”

[I can say this because I know that if I ever wrote a novel, this would also be my inclination. But I don’t write novels, now, do I?]

Anyway, in a typical year, I imagine that I read 30 of these soul suckers. Each more forgettable than the last.

Plotwise, it is a complicated story board filled with chance mishaps, and peppered with the main character’s laziness: Hero is a bit of an underachiever. He starts out with a girlfriend and a side project, and loses both and his job and then subsequently his apartment and half a tooth. He gains a couch and a new job at a porn theater, where he has to maintain a gay facade. He is thrown through a glass case during a robbery. His best friend snags a bullying woman who beats said best friend, and then his best friend commits suicide. Bye Bye couch. Hello, more complicated relationships. Every day of the book is broken bones, pocket change and chaos, only it gets more absurd and more frantic.

This is the last line that made me laugh:

“The trick was looking both punkishly gay for Sergei, but afterwards older and responsible for Glenn, the career woman.”

But before that, the pages were singing: “When the train screeched into Rector Street, she fell on me just as I was inhaling open-mouthed. Her bearded armpit sunk into my mouth; It tasted like a Big Mac.”

I’m hoping this runaway book thing is a fluke and I’m going to give Nersesian another shot, though. I mean “It tasted like a Big Mac?” There’s gold in there somewhere.