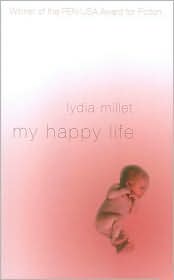 Saying that I really, really loved Lydia Millet’s My Happy Life makes me feel a little bit creepy. There isn’t much happy in the life of our unnamed narrator who talks about her life while being locked up in an asylum that has apparently been abandoned.

Unnamed Narrator has not had it easy. She was found in a shoe box near an orphanage as a baby and spent her childhood bouncing from foster home to orphanage and back again. She’s often homeless and has the hapless luck of ending up in the company of people who want use and abuse her — physically, mentally, and sexually. It’s kind of horrifying, and yet the book is tender and beautiful at the same time.

See what I mean by getting the creeps from enjoying it so much?

If you want to hear me reading from My Happy Life, Seen Reading has made that dream come true for you.

Millet works some magic here with her prose. Unnamed Narrator tells her story in such a simple, matter of fact way it’s hard not to get carried away in the almost child-like charm of her voice. Despite the atrocities she has suffered, Unnamed Narrator is never maudlin or self-pitying. She just rolls with the punches dealing with each situation that arises the best that she can given her lack of education and money.

The most heartbreaking part of Unnamed Narrator’s happy life is that she tries really, really hard to find goodness and beauty everywhere. She does not want much, a dry place to sleep, some food, and the opportunity to work. She’s thrilled when she lands a job as a maid and given a basement room with a small, high window and a drain in the middle of the floor. The room is infested with mice, and yet Unnamed Narrator is thankful for what little she has.

But here, here is the best part of everything, Millet Unnamed Narrator’s voice is so genuine and so credible that you never doubt her for a minute. However, as you’re reading along the doubts kind of wiggle in. There’s a little bit of Really? Really? and you wonder just how much you should be trusting Unnamed Narrator’s account of things. It’s the kind of ambiguity that’s not frustrating, rather it’s thought-provoking and satisfying. It makes you think about the book, trying to figure it out long after you’ve finished it.