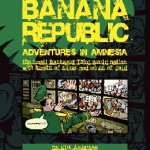 I remember reading Kirk Anderson’s comics in The Onion back when it was just a weird little tabloid outta Madison, Wisconsin. This was way before it become the online phenomenon it is now. Then when he joined the PiPress where my beloved Jim Walsh worked, I was in newspapernerdgirl heaven (only to be outraged when they let him go). Anderson’s political cartoons are are sharp, biting, and insightful. Oh, and funny. In the way that things that are true and uncomfortable make you laugh kind of funny. If you’re not familiar with his work, I feel sorry for you and invite you to go take a look. Anyway, Anderson recently released Banana Republic: Adventures in Amensia a collection of comics about “the small backward Third World nation with hearts of silver and mines of gold” that originally ran in the Star Tribune. Saturday, Anderson will be talking about the book at 10 a.m. at St. Martin’s Table 2001 Riverside Ave., Minneapolis and if that’s too early for you, you can catch him February 10th at Common Good Books in St. Paul.

What book(s) are you currently reading?
I’m always reading about 57 books at once, and making no progress on any of them. I generally favor non-fiction about political and social issues, which are usually horribly bleak and depressing… dealing as they do with, you know, reality and all. These include A Question of Torture by Alfred McCoy; True Enough: Learning to Live in a Post-Fact Society by Farhad Manjoo, and Waging Nonviolent Struggle: 20th Century Practice and 21st Century Potential by Gene Sharp, which is actually powerfully hopeful (I’m really stretching myself!).

Have you ever had a crush on a fictional character? Who?
The star-bellied sneeches were terribly homoerotic… No, I don’t recall any crushes.

If your favorite author came to Minnesota, who would it be and what bar would you take him/her to?
I would take Mark Twain to Grumpy’s.

What was your first favorite book?
Something like Billy and the Big Red Dump Truck. I was way into dump trucks, and wanted to be a garbage man when I grew up, because they got to ride on the back of the trucks, which mom and dad would NEVER let me do with the station wagon.

Let’s say Fahrenheit 451 comes to life, which book would you become in order to save it from annihilation?
Oh, definitely Billy and the Big Red Dump Truck.

What is one book you haven’t read but want to read before you die?
What I Would Have Done Differently With Perfect 20/20 Hindsight: Advice for a Struggling Mortal by Kirk Anderson, from beyond the grave.