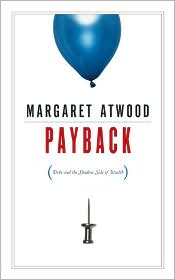 Margaret Atwood’s Payback is an examination of how debt and wealth work in modern humanity. I became fascinated with Atwood after watching an interview she participated in with Bill Moyers on the PBS show “Faith and Reason”. Atwood has religious views that are similar to the views I hold, which made me interested in this book. What I failed to do was remember my lack of interest in anything related to economics. Whether it be an economics class, financial report in the media, or simple banking, my interest and attention span dwindles to a mere trickle when faced with economic matters.

Thankfully, Atwood is a brilliant writer. It was her depth of research and literary acumen that even kept me wanting to read the book at all. Lacking the boring and dry style of the Wall Street Journal, Atwood explained the foundations and mechanics of debt and wealth by using examples from science, history, and literature. Atwood took the idea of debt and wealth as a “human construct thus an imaginative construct” and looked into these four areas to help explain this idea: the ancient and seemingly psychological idea of fairness, the connection of debt and sin, the stories and drama behind our debts, and the shadowy and dark side of both debt and credit. Finally, Atwood explored the ways we payback our debts by updating the story of Charles Dickens’ Ebenezer Scrooge to fit our modern debt and payback predicament.

However, what made Atwood’s book readable for me may have also been its curse. There are several areas in the book where Atwood quoted extensively from literary works like Dickens’ A Christmas Carol and Christopher Marlowe’s A Tragical History of Doctor Faustus. The repeated references to literary works, while making Atwood’s book technically solid, wore me down after awhile and made my eyes glaze over. I felt like I was stepping back into the rigid academic research class I struggled with last year. Work after work, source after source, I felt like I was a prizefighter ducking and weaving from the next literary reference flying toward me. Along with Scrooge and Dr. Faustus, I was blocking repeated blows from John Milton’s Paradise Lost and Shakespeare via Hamlet and The Merchant of Venice.

Despite this criticism, I have to acknowledge Atwood’s research abilities. Her claim that the issues our modern humans have with debt is bolstered by a breadth of sources and analysis to back it up. For example, in her claim that the debt and credit cycle is fueled by an ancient and innate sense to be fair, Atwood cited an experiment that displayed monkeys exchanging pebbles for slices of cucumbers. When one of the monkeys was given a grape instead of a cucumber slice, the other monkeys noticed this and refused to participate anymore in the pebble and cucumber exchange. Atwood then took this idea further by using more examples from science, literature, and historical history to back up her idea that the fairness tendency in humans is a motivating factor behind the debt/credit cycle.

Atwood maintained this standard throughout the book. Although this made the book thorough and well argued, it also made reading it a bit tedious. I am willing to overlook that, though, because of my inability to stay connected to anything economic very long. You should see me fall asleep behind the wheel while listening to public radio’s Marketplace.