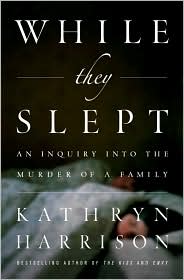 In late April, 1984, Billy Gilley,18, killed his parents with a baseball bat. And when his little sister Becky wouldn’t go upstairs while he finished, he beat her, too, which eventually killed her. Jody Gilley, 16 at the time, stood frozen in her bedroom, disassociating, imagining she was a character in a book and wondering if that character would jump out the window to get away from her brother.

When he was finished, Billy Gilley came upstairs, bloody, and said to his sister: “We’re free.”

Kathryn Harrison wrote While They Slept because she was curious about Jody Gilley, and how this survivor has separated herself from what happened that night. How a life can split and become “before” and “after” versions. Harrison’s own life has that same split: life before she was involved in an incestuous relationship with her father, that begins when he jams his tongue into her mouth at the airport when she’s 20. And life after it ends, four years later.

I read this book because in 1987 a guy in my brother’s sophomore class killed his mom and dad and sister and brother. [I knew them both. We went to a pretty small school: The girl was two years older than me and explained a crude version of menstruation to me at a slumber party once; the boy was a year younger than me.] Not surprisingly, this is the sort of thing that sticks with you for 21 years and for every who, what, where, when and especially why that goes unanswered, I’ve been forced to play scenes out in my head over and over.

Harrison meets with both Billy Gilley, who is obviously in prison, and Jody Gilley, who went on to graduate from Georgetown, officially hopping to the other side of the country and cutting ties with her past. Harrison chronicles the physical, sexual and emotional abuse the Gilley children endured. The way social services failed them, especially Billy, who was frequently caught smoking or shoplifting, only to tell authorities about the atrocities at home and then later deny his accusations at his parents’ heavy-handed insistence.

This book is part true crime. The meat of the killings spread out over the course of the book. It’s also part memoir, as Harrison tries to draw meaning for herself and her own past from Jody Gilley. It is also a notebook filled with the outtakes — the story behind the story, how the story evolved, what Billy Gilley likes to snack on when Harrison meets with him in prison. It is a spoof on In Cold Blood if Truman Capote had written it in first person: “So here I am in Kansas, see, and I’m with my friend Harper Lee.”

Then, it becomes a literary critique on the surviving Gilleys. Harrison analyzes Jody Gilley’s writing, and Billy Gilley’s children’s book as though they are merely characters in a college course. Jody Gilley’s compartmentalization for survival. The way Billy Gilley smooths over the jagged surfaces of the story to tell something that is more succinct, a revision that changes the subject whenever his dead sister Becky is mentioned. This becomes exhausting. Frankly, I’m usually interested in what Harrison is writing, but I’m not a fan of her writing style. She is a flowery journal writer who should shoot for inclusion in Cringe.