We interrupt this week of Best of Lists to bring you a very special series of our 6 Questions interviews. To celebrate Milkweed Editions’ publication of Fiction on a Stick, an anthology of stories by Minnesota writers, we’re going to feature a few of the contributors here on MN Reads. Some of the contributors will be reading at the Fiction on a Stick Launch Party, on Thursday, December 11 at 7 p.m. in the Target Performance Hall of the Open Book, 1011 Washington Ave. S., Minneapolis. 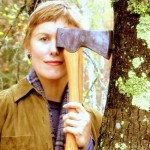 Sarah Stonich is the author of two novels These Granite Islands and The Ice Chorus (due in paperback in April) as well as the forthcoming are a collection, Vacationland; a novel, Fishing With RayAnne; and a memoir, Shelter.

You can learn more about Sarah and her upcoming releases on her Web site.

What book(s) are you currently reading?
Under The Skin, by Michael Faber, an uncategorizable novel featuring a half-human, half-canine, somehow appealing protagonist from the unlikely future. Cosmetically altered to appear full-human, her job is to drive Scottish roads in shitty weather to hunt hitchhikers, drug them, and bring them to a fattening facility, a sort of underground stockyard that supplies the canine-ish elite of the underworld with the delicacy of human flesh. The last thing I would’ve expected to like, but the writing sucked me in. Also reading Peter Freulich’s amazing The Book Of The Eskimo, first published in the 1950’s. The most intimate, unPC, disturbing, and fascinating account of arctic life, the Dane who wrote it lived it, authentically.

Have you ever had a crush on a fictional character? Who?
T.S. Garp.

If your favorite author came to Minnesota, who would it be and what bar would you take him/her to?
William Trevor, quick-like, before he takes a dirt nap. I’d take him to the St. Paul Curling Club observation bar, smuggling in a bottle of 18-year Talisker.

What was your first favorite book?
A Tree Grows In Brooklyn, hands down.

Let’s say Fahrenheit 451 comes to life, which book would you become in order to save it from annihilation?
Ah, what?

What is one book you haven’t read but want to read before you die?
Ulysses disguised by the book jacket for Goodnight Moon.