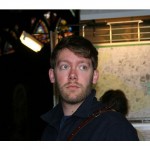 This week we are celebrating Milkweed Editions’ publication of Fiction on a Stick, an anthology of stories by Minnesota writers, by featuring some of the contributors. Today we’ve got Ethan Rutherford. Ethan’s work has appeared in American Short Fiction, Verb, The New York Tyrant, Esopus, Faultline, the Minneapolis Star Tribune, and has been nominated for a Pushcart Prize. He lives in Minneapolis. Don’t forget you can celebrate the publication of the anthology on Thursday, December 11 at 7 p.m. in the Target Performance Hall of the Open Book, 1011 Washington Ave. S., Minneapolis.

What book(s) are you currently reading?
True Grit, by Charles Portis; Omon Ra by Victor Pelevin; The Boat, by Nam Le; and a galley copy of a collection of stories called Once The Shore, by Paul Yoon. The stories in Once the Shore are just exquisitely beautiful, quiet, strange, intricate things. I’ll go on record to say that when it’s published in April, it’ll set the world on fire.

Have you ever had a crush on a fictional character? Who?
I’ve had – and always will have – a deep and abiding love for Jean Grey (from the X-Men). Jake Barnes, from The Sun Also Rises, was the first fictional character I wanted to be, which is a form of love. It’s strange, thinking about that now. I don’t think I was a very good reader in high school. I don’t think I had any idea what that book was about. Nor did I understand, fully, that in order to be Jake Barnes you would’ve had to have fought in a war (which I don’t want to do) and been seriously damaged “down there” (another thing I could do without).

If your favorite author came to Minnesota, who would it be and what bar would you take him/her to?
I’d like to take Herman Melville to the Sportsman’s Pub, watch him pick a fight, and then pop over to the U Otter Stop Inn for a little karaoke (Sea Chanties for Everyone).

What was your first favorite book?
First: The Twelve Labors of Hercules (illustrated); then Slaughterhouse-Five, or The Children’s Crusade, by Kurt Vonnegut Jr.

Let’s say Fahrenheit 451 comes to life, which book would you become in order to save it from annihilation?
Lolita, by Vladimir Nabokov

What is one book you haven’t read but want to read before you die?
A Dance to the Music of Time, by Anthony Powell