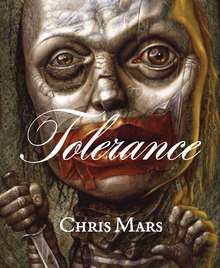 Chris Mars was once best known as the drummer for The Replacements, but now he’s showing that there is life after rock and roll. Mars recently released the beautiful, dark, and disturbing book Tolerance. I would tell you more about the book, but I just wrote about it yesterday. Today Mars is answering the 6 questions we always ask. At 8 p.m. tonight, he’ll be signing his book (and only his book) at Magers & Quinn, 3038 Hennepin Ave. South, in Minneapolis.

What book(s) are you currently reading?
Reading two: Naomi Klein's The Shock Doctrine and Nick Cave's And the Ass Saw the Angel.

Have you ever had a crush on a fictional character? Who?
Yes. Myrna the Minx from A Confederacy of Dunces.

If your favorite author came to Minnesota, who would it be and what bar would you take him/her to?
My favorite author is Sally Mars, and I take her out to dinner pretty regularly.

What was your first favorite book?
Where the Wild Things Are by Maurice Sendak and the “P” (for painting) volume of the “The World Book Encyclopedia.”

Let’s say Fahrenheit 451 comes to life, which book would you become in order to save it from annihilation?
If it were going down like that, I'd have to pick Fahrenheit 451.

What is one book you haven’t read but want to read before you die?
A physics book written by some future Hawking or Einstein that unifies all theories, thereby explaining the workings of universe.