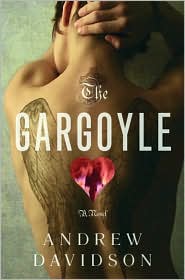 Andrew Davidson’s debut novel The Gargoyle, is the kind of book that gives me nextbookaphobia.

This is a condition marked by great fear of starting a new book because there is no way that it can possibly live up to the last book you read, because that last book was really fucking good. I’ve experienced this condition exactly twice this year. First with Ethan Canin’s America America and then again with Elizabeth McCracken’s An Exact Replica of a Figment of my Imagination.

It’s a little hard to write (or talk) about The Gargoyle without sounding like a cross between a really excited four-year-old or a complete stoner. When trying to describe the books there’s a lot of disconnected “and then and thens.” Here, I’ll show you:

So there’s this pornstar who is in a terrible car accident while he’s driving coked up and drunk, and he spills bourbon in his lap, and then is burned over most of his body — losing his penis in the process. So then he’s in the hospital and this mysterious schizophrenic woman named Marianne comes to visit him and she says they were married in a past life like 700 years ago and she’s been waiting for him for all this time. And then so they become friends and oh Marianne is a sculptor who carves gargoyles out of stone and oh during the unnamed narrator’s recovery she tells him stories not just of their past together (she was an Englethal nun in Germany in the 1300s who worked at a scriptorium) but about some great love stories of the past. There is some other stuff too.

Want more about The Gargoyle

See what I mean? Crazy. This is a big, big book about all-consuming love. The story is so engaging that even my irrepressible editor was suppressed through most of the book (there were a few overblown sentences or descriptions that caused a bit of eye-rolling). After I read this book I quickly dubbed it the new Time-Traveler’s Wife (which is a high compliment).

Like The Time Traveler’s Wife, The Gargoyle is a big, beautiful, goobery romance wrapped up in a wonderful, engaging concept.

This has become the new book that I am trying to push off on anyone who will listen, because it was that much fun and I can’t imagine a single literate person who would dislike the journey that Davidson takes the reader on.