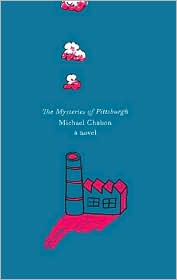 Art Bechstein has just graduated from college, broken up with his girlfriend, and has an entire summer with which to play. When his father, vaguely identified as a gangster, asks him about his plans, Art answers:

“I anticipate a coming season of dilated time and of women all in disarray.”

On his way out of the library for the last time, he meets Arthur, intreguing and gay, who absorbs Art into a new friend-group of hyper-real characters and teeming with sexual tension: The mythical and beautiful Jane, who is in love with the rowdy bad-boy alcoholic Cleveland; Phlox, a girl who adopts new personalities with each outfit, punk one day, a Christian the next, Art’s girlfriend one day, his ex the next. Art gets a job at Broadway Books, which is a disgusting haven of mass market titles sold by overweight EMT-wanna bes. It’s a bookstore that Art believes looks like it should sell meat and that the whole book thing was an unfortunate accident.

Art’s struggles during this particular summer include coming to terms with his feelings for Arthur, hero worship turned sexual, and his relationship with his father in light of his father’s gangsterism [and how his dad’s job ties into his mother’s suspicious death.] It’s the personality he plays for his father where the best lines of this book are played:

” … I’m calling you from this girl’s kitchen and she’s standing here naked, and you know, Dad, I can see that some women do indeed look like guitars.”

The Mysteries of Pittsburgh is a clever and fun novel by Michael Chabon published in 1988 that has the mix of luck and laziness and long walks usually found in a novel by F. Scott Fitzgerald [there is a moment mid-book where Arthur reveals that he can’t drive a car, and he says to Art “There have always been people willing to do my driving for me” which is so Jordan Baker of Gatsby], with a touch of the “nothing really happens” that was popular with the sort of pop novelists from the 1980s who’s books were turned into movies starring actors who would ultimately bounce in and out of rehab. [My favorites.] It has traces of Wonder Boys but has little in common with The Amazing Adventures of Kavalier and Clay or The Yiddish Policemen’s Union.

As a side note: I read the Olive Reader version of this book, which I heard about here and watched about here. I like this concept of a book that fits in your pocket being marketed as a sexy accessory.