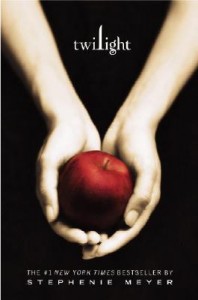 Yowza! I was surprised by the rage Stephenie Meyer’s Twilight brought out of me. This was one of the most sexist novels I can ever remember reading, and I grew up on a steady diet of Sweet Valley High and VC Andrews.

This poorly-written dreck made me so annoyed and angry that I have a hard time not being completely condescending. I don’t think I’ve eye-rolled so much during a book since I read Nicholas Sparks’ shitty, shitty The Wedding.

Twilight tells the story of Bella, a seventeen-year-old Arizonan who moves to Forks, Washington to live with her dad after her mom marries a minor-league baseball player and moves to Florida. Bella’s not thrilled about the move until she meets Edward, a pale, beautiful boy who turns out to be a sparkly vampire.

Why this book is an international, best-selling phenomenon is beyond me. I can understand why the barely-pubescent crowd loves it. Because the relationship between Bella and Edward is the kind of cheesedog bullshit that teen girls think romance is — inevitable, all-consuming, and filled with unabashed proclamations of their love.

When I was thirteen I’d have probably thought of Edward as the height of romance, but through my 30something eyes I can see that he’s sexist and bordering on abusive. There are many times throughout the novel where Edward chastises Bella for being too alluring and irresistible. He tells her that if he can’t control himself (and it’s really, really hard to do so), that if something bad happens it will be her fault. ARE YOU KIDDING ME?

Plus, there’s the constant need to watch-over and protect her, and the fact that he continually tells her she can’t take care of herself. Of course, Bella doesn’t help herself at all and totally loses herself in Edward — doing everything he says and never standing up for herself. And, while we’re told Bella is a smart girl (she’s disappointed by the library’s book selection) we never see it.

Then there’s the writing which is awful and repetitive with the incredulous grins and the eyes. OH THE EYES. Christa already made a helpful list about the eyes. I would get into it, but, really the story is so awful and distasteful that the bad writing is just like frosting on the shitcake.

Before you get up in arms about why I even bothered with this book, it’s because my Rock & Roll Bookclub selected it. I am excited to discuss it. Hannah, the thirteen-year-old daughter of two of our members, loves the Twilight series with a passion. I am curious to see what she has to say about it and get her insight.