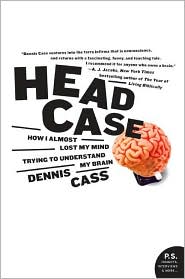 I was the winner of the nonfiction sweepstakes that produced Dennis Cass‘ book Head Case. Cass is a journalist who lives in Minneapolis and his first book is an attempt to figure out his wits to overcome a case of writer’s block. Using the finest amateur scientific methodology available, this task rapidly became a quest for Cass to figure the mental issues of both his stepfather Bill and himself. Throughout the book, Cass would talk about Bill’s gradual descent into mental illness and addiction. To help him understand Bill (and ultimately his own mind), Cass talked with scientists and professors about his theories, often with embarrassing and humorous results. Cass became the subject of mental experiments administered both professionally and personally.

As a fellow student of the humanities (Cass was an English major, whereas I was a religion major), I had difficulty focusing during Cass’ hypotheses, theories, and scientific explanations. I tend to become glassy-eyed whenever I read scientific papers and works laced with jargon. I become excited when I read about matters like transcendence and when I finally came to the chapter about Transcendental Meditation and enlightened brains, I thought Cass was going to have a religious event. However (much to my disdain), Cass’ own ambivalence about religion and spirituality hindered any sort of breakthrough on this front.

As I was getting ready to unleash my venom about Cass’ lack of citations in the book (none to be exact), I came to his disclaimer at the end. Cass said, “In translating and applying the science, I have done my best to be as faithful to my source material as possible, but as these pages show, I am only human. As a result, the information in this book is to be used for entertainment purposes only” (pg. 211). It finally dawned on me that this book has nothing to do with science and everything to do with therapy. By researching how the brain works, Cass was sorting out his own life experience. Cass’ gradual descent into an obsessive-compulsive state of brain research, self-experimentation, and his addiction to Adderall were all ways of making sense and peace with his own brain.

Since the book was more about therapy and entertainment and less about science, I was willing to overlook the lack of citations and graphic descriptions of animal abuse in experiments (this is the third book in a row now that vividly describes animals being abused). Instead, I embraced the book’s humor, honesty, and frequent references to Minnesota icons like the State Fair, where Cass held a real brain at the University of Minnesota building.