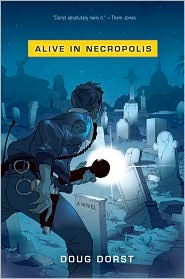 After drifting for a few years, the accident-prone former Hard Ten bartender Mike Mercer is inspired to become a cop when he reads a newspaper article about a San Francisco goodwill police officer who practices his mime routine while walking his beat.

Mike Mercer’s personal life involves a messy tangle with Fiona, a nurse at least 13 years his senior who is drinking herself toward the expiration date stamped on her fertility.

He has taken to watching over Lorna Featherstone, his predecessor’s widow — who bakes barely edible snacks for the boys downtown and has taken an interest in gambling and televised religion.

Mercer is also trying to solve a crime involving a film director’s son Jude, who was found naked and bound in a cemetery. In his freetime he hangs with his high school friends, a mix of extremes. Some still talk about hookups and live like college students; some are adult-adults with mortgages.

And then there are the restless dead residents, who are being bullied by a small gang of thugs headed by a former mafioso. Mercer begins to learn about these souls while reading police reports that Featherstone officially filed in a box in his own closet, rather than at work when it becomes apparent that his supervisors don’t appreciate or take seriously his communing with the dead.

It is the dialogue that really makes this book, especially the cop banter. The night shift gathers in bars or while patrolling to toss back and forth the insult d’jour. Ass-bag, Dick-Weasels, Hatchet-face. And the oneliners: “Nervous drivers,” [Mercer’s partner] says. “Watch out for them, Boy Thirteen. A citizen with the yips is just as dangerous as one who’s shitfaced.”

Also, there is a complete lack of character cliches. While these same people may exist in thousands of novels, none of them do what they would do at the hands of another author. That Evangelist is not corrupt; the saucy young magazine writer who seduces Mercer at the party may not make the greatest love interest; And just because Mercer and Fiona break up does not mean there will be a tender reunion at the end where wrongs are admitted while staring into sunsets. The widow Lorna Featherstone picks up a gambling habit, but not for the reasons you think. And when Mercer’s partner Toronto gets his heart broken by a young circus star, he puts his life back together at a Zen Center.

Plotwise, what starts as a clever idea fizzles to a half-assed meh. But the writing stays sharp and witty and fun to the end. And really, in this book, the plot is really just a playground for the words anyway.