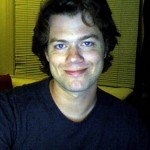 Yeah, I cannot deny that I’m pretty excited to have Jake Mohan writing for MN Reads. I first discovered Jake’s writing years ago on his personal blog The Dependent Clause. His writing is so good that I cyberstalked him at Reveille and Utne. But now, I won’t have to look too far to find his musing on literature. They’ll be right here. Sweet! Oh, and one more thing about Jake, he’ll be teaching The Art of the Blog at The Loft this spring. If you have any interest in blogging or The Loft, you should look into the class.

What book(s) are you currently reading?
I have a choice with these questions: to answer dishonestly, thus making my tastes seem diverse and obscure, or to answer in a way that makes it embarrassingly apparent how indebted I am to, and smitten with, a very popular author. I’m going to go the second route, with all the attendant caveats in place.

So here goes: right now I’m re-reading Infinite Jest, a project I began over the summer but which attained a painful relevance after David Foster Wallace’s suicide in September. I’ve also been dipping into The Boys of My Youth by Jo Ann Beard, and the 2008 Best American Essays, edited by Adam Gopnik.

Have you ever had a crush on a fictional character? Who?
Rosemarie Hoyt in Tender Is The Night. Margarita in The Master & Margarita. Zooey in Franny & Zooey. Penny from Inspector Gadget.

If your favorite author came to Minnesota, who would it be and what bar would you take him/her to?
Again, my obsessive fealty to one author presents itself: Since September, however, the limitations of the metaphysical plane have prevented me from doing much of anything with my favorite author. Of those still alive, I’d like to hang out with Jonathan Lethem. Maybe take him to the 331 or the Kitty Kat Club. He seems like a laid-back guy, and he likes to talk and write about music.

What was your first favorite book?
After Goodnight Moon, it was probably an embarrassing sci-fi/fantasy title — the Dragonlance books or Ender’s Game. (With Tales of a Fourth Grade Nothing in there somewhere.) Beginning in high school I clung fast to the books my favorite English teachers assigned — Wuthering Heights, To Kill a Mockingbird, the usuals.

Let’s say Fahrenheit 451 comes to life, which book would you become in order to save it from annihilation?
Again, I’m going to appear terribly one-dimensional by saying Infinite Jest. But there’d probably be a long line of others already prepared to become that book. So maybe something slightly more obscure, like The Sheltering Sky.

What is one book you haven’t read but want to read before you die?
Any of the Russian masters, I’m shamefully underread in that regard. The Brothers Karamazov, especially. My father was a professor of Russian literature and every year that passes without my reading more Dostoevsky or Tolstoy seems like a waste.