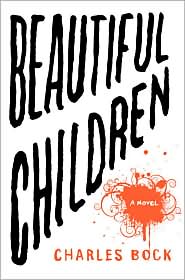 According to a New York Times Magazine feature on Charles Bock, it took the sadist 11 years to write his first novel Beautiful Children. Then, 406ish pages of the hardcover later, Charles Bock gives a shining example of why one should not spend 11 years on one book.

Mainly, this beast is full of words.

The story centers on the disappearance of 12-year-old smart ass rapscallion Newell Ewing. He spends a night out in his hometown of Las Vegas with his creepy older friend Kenny, a social misfit comic-drawing savant, and never comes home. His story is told over the course of one night. Then there are other characters: his parents, a comic book artist, a stripper who can start her fake boobs on fire and her money-grubbing idea-man boyfriend, a nameless bald high school girl who is totally emo. These characters get a back story and in some cases an omniscient glimpse at what happens to them in the future. Some of these characters encounter Newell. Some don’t. Some of these characters pop up in the peripheral of another’s story. Some don’t.

This book is obvious and way overwritten, the words are self conscious of themselves. Every scene and every person in this novel is described in a very micro way. It becomes like teeth that are artificially whitened to an almost-blue, or a steak that marinated four days too long. It’s a term paper that the overachieving student starts on the first day of class, and hones every day until the last, all without ever deciding on a thesis. It is a book that is good because of the coddling that each letter received. But it is a book that without that coddling wouldn’t be good at all. Typically in a book that is wordy and huge and detailed, I will dog-ear pages with sentences or ideas that I like. A book this dense should have been origami’d to death; I noted just one section mid-book about the porno film industry.

Almost all of the characters are interesting and the scenes are interesting. But more than telling a story-story, this novel is more like a video camera dropped from the sky that started recording, and then suddenly just stopped recording. The book’s jacket says it all in one sentence: “One Saturday night in Las Vegas, 12-year-old Newell Ewing goes out with a friend and doesn’t come home.” Early in the story it’s explained that he wasn’t kidnapped, he is considered a runaway. And that’s it. No answers. No glimpses of 20-years later. There is no finale, no resolution, no better or worse. It isn’t satisfying at all.