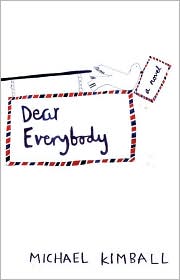 Listen to me. If you were smart you would write interesting Largehearted Boy Book Notes essays about your book and include good music. I cannot count how many books I have read because of the author’s Book Notes essay. Wait. I will count a few just so you know how many I’m talking about: Sabotage Cafe, Personal Days, The Monsters of Templeton, Throw Like a Girl (and there are eight others on my shelf that I bought but haven’t gotten around to reading yet).

It was Michael Kimball’s Book Notes’ essay that led me to pick up Dear Everybody (specifically his mention of Bon Iver’s “Skinny Love”).

Michael Kimball’s Dear Everybody is a novel about weatherman Jonathan Bender told through a series of suicide notes he wrote before he killed himself. It’s a sad, sad story that unfolds. Jonathan wrote notes to his mom, his dad, his brother, his ex-wfie, ex-girlfriends, old neighbors, Santa Claus, and the people who watched him on TV. A lot of the notes are apologetic and kind of heartbreaking.

In one letter Jonathan apologizes to some neighbors for hiding out in their garage to hide from his abusive father. Some of the letters are funny, especially ones where Jonathan thanks old girlfriends for having sex with him.

Jonathan’s story is further fleshed out with entries from his mom’s diary, transcribed talks between his dad and his brother, and various school and psychology reports.

It’s a testament to Kimball’s writing that even though Jonathan’s obituary is on the first page of the novel, as the book goes on you still find yourself rooting for Jonathan and hoping for a different outcome. Even as Jonathan’s depression grows darker and his actions more desperate you still want him to snap out of it.

My only complaint about the book is with Robert, Jonathan’s brother. Robert has a lot of built animosity towards Jonathan, and even after Jonathan’s death treats him with great disdain. I didn’t get why, and it really bothered me.

But other than that, the novel is spot on. It amazes me that a writer can build suspense in a story where we already know the ending. It’s kind of awesome. In fact, I enjoyed this book so much I did something I never do. I wrote the author a fan letter.

So dorky, I know! But really, that’s how good this book is. You should totally read it. I would never lead you astray.

Yours ’til Niagara Falls,
Jodi

I just saw the cover of your book on my friend David’s (the Largeheartedboy) Facebook page and wanted to tell you real quick-like that I really liked your book. It was sad and funny, and I loved the idea that as a young boy Jonathan thought the weatherman would protect him.