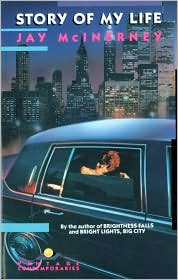 In August, it became national news that there was a Jay McInerney novel that I had somehow overlooked. I thought I had McInerney covered — I even read his winefesto Hedonist in the Cellar for the love of God — and here was a novel-novel, probably set in New York City in the ’80s, probably filled with a cast of coke fiend scenesters, and probably something I should have read years ago.

Story of my Life is written from the perspective of 20-year-old Alison Poole, a party girl and aspiring actress. She is a slightly nasally uptalker, who drops a lot of “like” and “rights?” and “and then he goes, so I go …” into the running monologue that is this story.

Like the other women in her girl posse, Alison has grown accustomed to a certain father-financed lifestyle, but lately his check-writing trigger finger has slowed. She gets resourceful, in one scene pinching smarmy ex-fling Skip Pendleton for $1,000 cash to abort a fictitious pregnancy, then using the money for tuition.

This is truly the See Dick Run novel of the McInerney collection: A 3-hour read with every word filtered through Alison’s voice: Cocaine, money grubbing, ass-grabbing, method acting and parties that end in naked “truth or dare” games where Alison has slept with most of the men in the circle and the truths result in hurt feelings. The story is simple and spans one naval-gazing month.

Alison is at that contradictory — yet not at all complex — stage: She understands it isn’t healthy to rely on her father for money, but blames him for raising her so that she expects this treatment. More than anything, she hates lies, but sometimes relies on omission. When she can’t reach her new boyfriend Dean on the phone, she correctly assumes the worst and sets out to one-up him. She loathes Skip Pendleton, but is drawn into his smug and evil vortex. When Alison comes home to find her sister and roommate all hopped up on whatever, she wonders if she sounds like such an idiot when she is messed up. Alison claims that she has slept with a lot of men, but she’s not exactly slutty. She passes off the phone number for an escort service as her own. Alison agrees to meet up with a man, and sends him to a dark tenement building that is at least a $20 cab ride from his home — and , of course, does not show up.

While Alison is flawed and irresponsible, she is written in an endearing way. She used to ride horses! Her greatest love is acting! And she is funny:

“I don’t know, these downtown artsy coifs may get attention, but not necessarily the right kind. I don’t think most guys are too keen on running their fingers through a fashion statement.”

“So Chuck’s with some girl he must have met in Las Vegas, although she’s actually from Texas, even her lips look like they’ve got silicone implants. Her name’s Tina, but she tells me her friends call her Teeny, and she kind of looks at her chest when she says this and jiggles her tits and that pretty much tells you more than you’d ever want to know about her.”

This is not the great McInerney novel. But he really nails Alison Poole’s voice and the confusion and competitiveness of being a 20 year old who hangs out with other 20 year olds. Those pensive “Who Am I” moments that are interrupted by a craving for Mexican food.