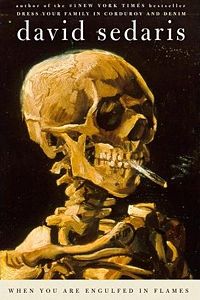 I was a late comer to the David Sedaris party. While everyone I knew was going on and on about how funny he was, I was busy reading dark and depressing, serious “literature” or, you know, liner notes of CDs. But long about 2004 (September 06, 2004 to be exact), I picked up Naked and never looked back. I quickly devoured everything he wrote or read aloud (I spent a lot of time on the This American Life Web site).

But for some inexplicable reason I was not overwhelmed with desire when his latest collection of essays When You Are Engulfed in Flames hit the shelves. I think a lot of my apathy came from reading the Table of Contents and realizing that I had already read half the essays in The New Yorker and wasn’t too thrilled about them the first time.

But my friend Jodie picked Engulfed for an upcoming Bookclub Bitches podcast, so I dove into the book with the grim determination of a student studying for w Chemistry final (at least how I would assume a student would study for such a final, I never took a Chem class in my entire life). Bleh. I should have just stuck with what I read in the The New Yorker and winged it.

Nothing’s worse than when someone tries too hard, and all these essays smack of a writer really trying hard — not just to be funny but also to be poignant. It’s painful. It’s as though Sedaris forgot that even the dark and sad can be funny, and now he’s trying to mete them out in equal measure which just makes for a mess of writing.

Of course there were a few gems. in fact, you can read them without buying the book. Here, I’ll do all the work for you:
Suitable for Framing: It’s about his family’s decision to become art collectors. It’s hilarious and a little heartbreaking when Sedaris realizes, much later in life, that they didn’t have a clue. At all.

Turbulence: Okay, so it is about a plane ride and crossword puzzles — but it’s the only essay in the entire collection that made me bark out loud with laughter.

Journey into Night: Another about flying but the one essay where Sedaris remembers how a lot of funny can be mined from a lot of sadness.

So yeah, kind of a big, dull dud from Sedaris. Which is wholly disappointing because I usually expect more funny and less muddy muddling about from him.