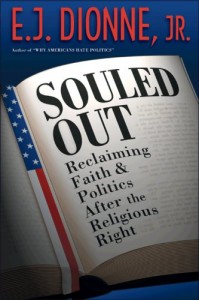 It is almost cliche that I am reading E.J. Dionne’s Souled Out after enduring two weeks of political convention coverage. It’s hard to believe that I did not plan it like this. I received this book after patiently waiting nearly six months after Minnesota Public Radio promised it as a free gift for my membership.

I often read Dionne’s articles in the Washington Post and agree with what he writes most of the time. In Souled Out, Dionne attempts to explain why the era of the Religious Right and the crude exploitation of faith for political advantages over. Judging by the speeches of last week’s Republican National Convention (Sarah Palin, Mitt Romney, and Mike Huckabee, to name a few), I am not so sure I agree with Dionne.

Souled Out does a marvelous job at showing off Dionne’s knowledge of the political world, especially when it comes to the dynamics of how religion, liberalism, and conservatism clash. As a left-center Roman Catholic, Dionne uses his religious experience (both personal and as a correspondent in the Vatican) to help the reader see how religion influences both politicians and voters.

While Dionne’s Catholicism offers an in for a secular reader to understand the role of religion in politics, it also throws off the religious balance of his book. Dionne spends a great deal of time in this book showing how Catholicism intersects with politics (offering two chapters on the Catholic angle) while putting forth very little from a Protestant perspective. This also holds true where atheism is concerned.

With this being said, Dionne is balanced when it comes to the liberal-conservative continuum. Dionne is fair in both his compliments and criticisms of both sides. Using abortion as an example, Dionne exposes the conservatives for using abortion as a single, non-negotiable issue while he criticizes liberals for allowing it to happen.

As a fellow left-center Catholic, I felt like I was in agreement with many of Dionne’s conclusions, the most important being a statement that liberals are finally taking religion back from the conservatives and not letting them continue to hold a monopoly on religious identification. Dionne remembered the success of a forum on CNN between Hilary Clinton, Barack Obama, and John Edwards, where the three discussed the role of religion in their lives. I believe religious liberals need to continue to do this to ward off the right’s many attempts to monopolize religion.