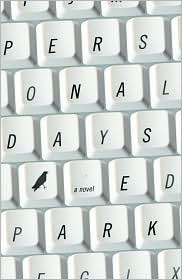 If you’ve had the “pleasure” of reading Joshua Ferris’ novel Then We Came to the End you can probably skip Ed Park’s Personal Days. The two books are so similar in tone and plot (right down to each book having a character writing a story about the office they work in) that you would think there would have been a lawsuit at some point.

Like Ferris’ novel, Park’s book also starts out in the first person plural point of view. The reader gets to know a group of office workers, “we”, who work for a failing company in New York City. As with a lot of companies that aren’t doing so well, there are layoffs and the air of impending doom pervades the place. We never know the company or the field they work in, making the distance between the readers and the characters that much greater. The problem with the first person plural point of view is that you never get close to any one character and therefore all the characters become some sort of amorphous blob. Park’s situation isn’t helped any by the fact that a majority of his characters have names that start with J — Jill, Jonah, Jenny, Jack . . . which makes it even harder to keep everyone straight.

Also, groups are hard to care about, unless it’s a group of baby seals or something. Anyway, the book is supposed to be this scathing satire of working in a cube farm, but for something to be satire I think it has to push over the edge of monotony and well reporting. Really the trials and travails of Park’s office workers isn’t satiric or unusual, it’s life for a majority of cube monkeys. The situations are so similar (until the very end which is really very good and would have made a great short story/novella) to the way things actually happen in corporate America that it makes for boring reading. It’s slice of life type of stuff. ZZzzzzz.

I keep reading this sorts of office novels, because I think there is meaning and something moving that can be mined from what is going in corporate America and what it’s like to be one of those unimportant cogs. I just haven’t found that novel yet or it hasn’t been written. Someone should write it and it should be a combination of Dan Kennedy’s hilarious memoir Rock On: An Office Power Ballad and Daniel Orozco’s haunting short story “Orientation.”