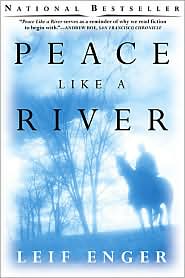 Back in July I began Leif Enger’s Peace Like a River, a book I thought might take me a week to read, tops. Though I should have been wary of such a time frame when I read the words of Jeremiah Land, “We, and the world, my children, will always be at war. Retreat is impossible. Arm yourselves.”

A better set up for this novel could not be written. Reuben Land, Jeremiah’s son and the narrator of the novel, is a pre-teen asthmatic boy. He and his sister, the scene-stealing, poetess Swede, navigate through what remains of their youth together after their older brother, Davy, is accused of murder and escapes from jail. The family goes on a journey to find him and nothing is ever the same for them.

Enger handles the writer’s trouble of the “child narrator” with a unique style. Sometimes Reuben speaks directly to the reader. Both he and Swede are obviously unique, overly-intelligent children. The theme of miracles is not only woven throughout but is a specific plot point in some cases. Enger uses his “miracles”, effectively, to create some loopholes for these characters who would have perished without them. But, while some readers may see these miracles as coincidental or a writerly copout, in fact Enger makes the miracles essential to the characters who believe in them.

Add to this, Enger is simply a damn good writer. The prose is rich and original, thick in some places and deep in others, but never once trite or purple. He describes a North Dakota blizzard,

“In the Dakotas it needn’t show to blizzard. The wind came low and fast, peeling the drifts. From her window upstairs Swede and I watched a cavalry charge minus the horses, wide chunks of snow tore themselves off the ground and flung forward, tumbling to white sand that coiled and rushed like Huns.”

The description of Reuben’s asthma is so detailed there were moments when I actually had trouble breathing as I read. Though he is but eleven years old when the novel begins, Reuben is an adult as he tells the story in past tense, and he uses all of the technique of an adult with the innocence and “first time” of a young boy.

A plotline I wished had been more thoroughly established and completed was that of Swede, a powerhouse in the novel who never quite gets her due. She is writing an epic poem throughout the novel, the tale of Sunny Sundown (remember she’s all of nine). The poem ties to their experiences looking for Davy but also provides an insight into this girl who is the true definition of a spitfire.

Overall, I would rather have read this novel over a few days in long gulps rather than tiny sips over the course of several months. For some reason, I was never called to the novel, but once I opened its pages I was compelled to continue reading the trials and joys of the Land family.