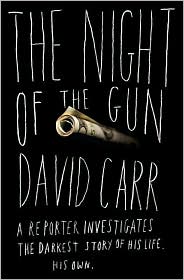 There are so few ways to deviate from the addiction memoir outline, short of posthumous publication. The plot lines are easy, like a murder mystery or a romance novel. Your hero is a drunk/junkie/bulimic/sex addict. Your hero faces a lifestyle change in which the options are extreme: change vs. death. Your hero dusts himself off [typically more than once], washes his hair, excavates the past for meaning and and writes something intelligible about how at one point he poked drugs into his eyeball and seemingly assaulted a cab driver — according to police reports. Now he writes for the NY Times.

That said, addiction memoirs are my favorite genre. David Carr still managed to stun me with The Night of the Gun.

1. As much as this book is about being a bad man who gets all hopped up and punches women in the face, this book is about my truth versus your truth and whether it coalesces with the documented proof. Two people sharing an experience and walking away with such different stories, whether it is:

Who actually owned the gun?
Did David Bowie sing directly to us?
What did witnesses see on 9/11?

Carr, the consummate journalist, provides documentation when possible. Arrest reports and published stories from his archives. Medical records. Direct quotes taken from videotaped interviews with friends and family. It is like he is saying: Look, my lows were low. Lower than you can exaggerate, low. And I’m not just some frat boy bragging about chugging Southern Comfort from a beer bong. Here is the official report.

This has to be the most honest addiction memoir I’ve ever read. And when what actually happened is debated, he defers to the less-broken brain.

2. You can read Anne Lamott and get the sense that she is never going to drink again. She has found a mix of spirituality and hiking, knows her triggers and has a way to sort of “time out” if she has to. After Marya Hornbacker wrote Wasted, it was hard to imagine her swirling her spoon around a mound of frozen yogurt again, lazily lapping at it for the next hour, getting full, and again dropping below 60 pounds. Maybe it’s because Carr is so committed to the best truth he can find, or because his teeter from 14 years of sobriety was so seamless — a simple hand-to-mouth muscle memory, almost — that this memoir doesn’t necessarily feel like him riding off into the sunset. This feels like the wind could change any minute and he could be marinating his organs in gin.

An addict is an addict, he gets this: “I could be drunk tomorrow or shooting dope even as you read this, but the chances of that are low as long as I make a daily decision to embrace who I really am and then be satisfied with that at the end of every day,” he writes.

3. Carr seems to realize that addiction comes before everything. His loyalty to Jayson Blair’s fight is surprising, especially considering that Carr is so attracted to hard work and honesty. But when the NY Times reporter is outed for falsifying stories, Carr chases him down and begs him to not fall off the wagon in this moment. Maybe Carr is considering the reputation he built as a journalist, later doused in kerosene, and through the virtue of hard work and forgiveness, was able to resuscitate.

Anyway, I couldn’t let Jodi have all the fun with this book.