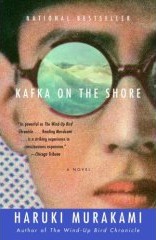 Through complete serendipity it is Haruki Murakami week on Minnesota Reads. Christa reviewed What I Talk About When I Talk About Running earlier this week, and today I’m going to write about Kafka on the Shore.

Within the last year or so, I made a rule that if I’m not engaged in a book within the first 100 or so pages I was going to stop reading it. I bent the rule for Kafka on the Shore because it was picked by my Rock and Roll Bookclub for our September read. I cursed every page past 100 where I wasn’t engaged. I wondered where the story was going and if I’d ever care.

It’s a fantastical story about a fifteen-year-old boy, Kafka, on a quest, a mysterious accident in the 40s that left a man, Nakata, mentally incapacitated, and then there are the talking cats. It was tough going. Murakami is a beautiful and majestic writer, and a demanding one at that too. He forces you to bring it when you read this book. Every time I put Kafka down I was not sure I wanted to pick it up again. I just wasn’t engaged in the story.

So Kafka’s a precocious young thing who runs away from home to avoid a mysterious prophecy his dad has made. Only, even though Murakami acts like it, it’s not such a big mystery, at least not for anyone familiar with the tale of Oedipus Rex. I gotta say, I wasn’t a big fan of Kafka as a character. I was much more interested in Nakata, the “dumb” (he refers to himself this way all the time) old man who was changed after a mysterious accident in the hills of Japan during WWII.

The story of each man is told in alternating chapters and while their stories start at two very different places, you know soon enough that Kafka and Nakata are bound to collide in a most unusual and mysterious way. Waiting for that collision is what will draw you through the last half of the book. You just gotta struggle through that first half which has a tendency toward repition and monotony to get to it. But it is worth the effort.

Long about page 276 the book got really, really good and doesn’t stop being good. This is a case where perseverance pays off. And it paid off well for me. This is one of the rare books that I’m really glad that I read because it has changed my perspective on writing and storytelling.

Like I said earlier, Murakami makes you bring it. He leaves a lot of the story up to your personal interpretation. He makes you bring your own ideas to what is actually happening to Kafka and Nakata, and I really liked that. It takes a strong and confident writer to not spell everything out for the reader. If you’re the kind of reader who wants their story served up to them on a silver platter with a nice bow, this is not the book for you. But if you’re willing to challenge yourself, think about what might be fantasy, what might be reality, and how those two things intermingle, you’ll really enjoy Kafka on the Shore.