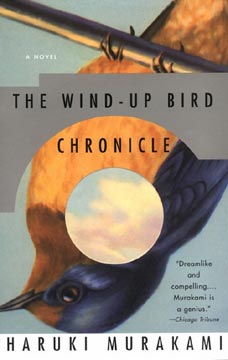 … And with that, my top five books of all time has to be reconfigured to make room for Haruki Murakami’s The Wind-Up Bird Chronicle.

This novel starts with the disappearance of a cat that belongs to the unemployed, wandering, passive and nondescript main character Toru Okada and his premenstral wife Kumiko. Eventually Kumiko follows the cat’s lead, leaving for work one morning and never coming home.

While trying to make sense of what is going on around him — and how it all ties into Kumiko’s hollow politician brother Noboru Wataya —  Toru Okada encounters a handful of quirky women who take him from Point A to Point B, via Point R, X and Z: May Kasahara, a teenaged neighbor girl who chain smokes and is interested in male-pattern baldness and death; Malta Kano, a sort of mystic in a red vinyl hat who is enlisted by Kumiko to help find the cat; Creta Kano, Malta’s sister, who appears in Toru Okada’s dreams and seduces him — only to physically run into him later and say things like: Hey! How about that dream! And Nutmeg Akasaka, who harnesses Toru Okada’s otherworldly powers — which come to him in the form of a blue mark on his cheek, acquired after sitting at the bottom of a dry well for a few days — and takes on the role of a sort of madam.

It’s all very complicated. And you are forced to check your disbelief at the door because any jam the main character encounters will be fixed with who-do voodoo.

The physical aspect of reading this book, alone, is intense. Within the first few chapters I fell asleep after reading and had a dream that was narrated by Toru Okada in a sort of slow, soothing, whisper — exactly what reading these words feels like. There are chapters that include torture scenes from World War II that are so vivid and so violent, my legs went numb. In one, a side character watches a man be skinned alive. “It truly was like skinning a peach.” In another, a handful of men are stabbed with bayonets, the process of doing it described in great detail that is essentially: stab, stir and repeat.

Mostly, reading this book feels like leaving the house early on a Sunday morning for a long walk to nowhere in particular. Veering off to kick a pile of leaves, grabbing a cup of coffee from a cafe, stumbling into an alley and staring at a garage door for an hour. Falling asleep on a park bench and waking up unsure of the surroundings. Spinning a circle with your eyes closed, then trying to walk home.

In a good way.