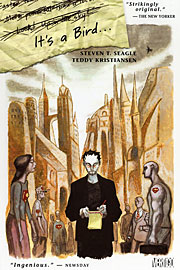 I take a lot of shit from the comic book geeks in my life for my unflagging support of Superman. He is the best superhero of all time. It’s not a popular position to take. Everyone’s all Batman’s the best, he’s mysterious and conflicted. Oh, oh The Dark Knight. This summer has not been easy.

I’ve heard it all about my beloved Supes — big blue Boy Scout, he’s invincible and therefore boring. I mostly turn a deaf ear to the haters and continue on with my love. The way I see it, there’s just more Superman for me. The rest of the planet can share the skeevy guy with the nice toys, that’s fine by me.

Poor Supes gets no respect, and that’s why all the haters should probably read It’s a Bird. . . by Steven T. Seagle and Teddy Kristiansen. It’s a weird sort of memoiresque graphic novel that takes on writer’s block, family, mortality, comic books, and Superman. Oh, and it’s fan-fucking-tastic.

In the book, Steve is a comic book writer who is offered a job writing Superman. While everyone in Steve’s life is thrilled with his opportunity, Steve isn’t so keen on the project. He’s got some issues when it comes to Supes and they are all tied up around his Grandma’s death from Huntington’s Disease. Huntington’s is a genetic neurological disorder that causes all kinds of horrible things and eventually results in death. Steve is very young when his Grandma succumbs to the disease. At the hospital hours before her death, Steve’s parents try to distract him with a Superman comic book.

Right around the time Steve’s offered the Superman writing gig, his dad goes missing. Here we have a hero at the crossroads. Steve needs to decide if he his going to take the gig, find his dad, and come to terms with what it is that’s nagging at him.

His main problem is that he can’t separate Superman from his past, or, for that matter, deal with it and what happened in the hospital the day his Grandma died. So instead, Steve wanders around in a funk alienating his girlfriend, acting out violently, and generally pissing off everyone in his life.

While bungling his way through the mess he’s made, Steve slowly figures stuff out and spends a lot of time thinking about the Superman legend. Steve argues that he can’t write Superman because he just doesn’t “make sense” and Steve, who is grappling with his own mortality, doesn’t have time for a man who cannot be hurt.

But as Steve learns (as will haters who muster the courage to read this book) if you really think about it, there’s more to Superman than meets the eye (he’s sort of like a Tranformer that way). Steve asks a lot of questions about solitude, fitting in, power, and justice, and how that all pertains to Superman. While I don’t think he comes to any startlingly original conclusions — gee, you think being the only surviving being from your planet might be a little lonely? — it still makes for entertaining reading. And, if you’re not a big fan of Superman you probably haven’t given these issues a lot of thought and you’ll find some of the things Steve discovers sort of revelatory.

Creative types, specifically writers, will dig the novel because of the things that Steve does to escape the story he doesn’t want to write, but that keeps haunting him anyway.