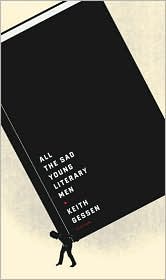 Keith Gessen’s All the Sad Young Literary Men is the story of three Ivy League educated bumbly fumblers who wander around talking about Russian history and trying to juggle complex adult women with another woman on the side. They have aspirations: a dissertation! a Zionist epic! more google hits! And they seemingly have a sort of expiration date for greatness, wallowing in doom and gloom at being in their 30s.

I feel no need to differentiate these men, since Gessen didn’t. Sam, Mark and Keith’s stories are each a chapter long and almost every chapter left me wondering “wait, who the hell is this again?” All three men are the sort of somersaulting naval gazers in ratty cardigans that are so hot when you are 22 and boring and pretentious and humorless when you are 28. Their voices are the same and their problems are versions of each other’s. They are unable — maybe unwilling — to be satisfied.

I didn’t notice until too late that the Table of Contents lists the character charged with each chapter. I could have used that decoder ring.

For the second straight book, I am unable to figure out if these characters are purposely annoying to make a point about a certain generation, or if the writer’s own annoyingness is shining through. Since one of the characters is named Keith, I am going to assume the latter.

If I were forced to write in the style of Gessen, which I am simply because it begs to be imitated, it would read like this:

That said: There is one fantastic chapter about Sam, wait, yes, Sam, who is working as a temp and obsessed with the dwindling number of googles attached to his name. He literally calls google to see if this number can be fudged in anyway, and invents a scam for his friend in IT to make it happen. His friend doesn’t want to touch it, google being a powerful enemy and all. Then some stuff happens involving a sex columnist. This chapter alone was great.