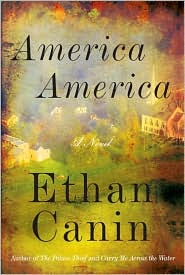 It’s hard to write about Ethan Canin’s new novel America America without staring into space and sighing dreamily. I’m going to put it out there. If this doesn’t turn out to be my favorite novel of 2008 I am going to shocked. Shocked and amazed. This book is so good that I have trouble finding the words to tell you about how good it is.

This is the kind of book that you get lost in. It takes you to another place and time so wholly that you will grow to resent all those things (eating, bathing, sleeping) that take you away from the book.

America America opens with the 2006 funeral of Senator Henry Bonwiller, a presidential contender in the 1972 race against Richard Nixon. Bonwiller’s campaign was derailed by a Ted Kennedy Chappaquiddickesque accident that resulted in the death of a campaign aid. The funeral causes our narrator Corey Shifter to reflect on his time working with Bonwiller, and more importantly the man behind Bonwiller, Liam Metarey. It’s a big, beautiful novel about journalism, politics, class, family, and, ultimately, America. It’s fucking brilliant.

This book is so good that when I finished it, I didn’t want to start any other book because I know it’s not going to be as good as America America. It’s so good that sometimes I just walk past the book, run my fingers over the cover, and sigh happily and fondly remember all the good times we had together. And there are so many good times in this book.

Because Canin is a genius, he imbues his minor characters with so much personality that you begin to care about them nearly as much as you do the main characters. For instance, Corey has a neighbor, Mr. McGowar who steals the show whenever he’s in a scene. McGowar might just be my favorite character. He’s an old man who can barely talk because he spent his entire life working in a rock quarry, and though he is practically illiterate he scribbles his thoughts on a small notepad he carries with him.

Then there’s quirky Trieste, the teenage intern who works for Corey’s paper. She’s a great foil for the present-day Corey because she’s so different from the 17-year-old he was when all the tragedy unfolds around him. Plus, Corey and Trieste have this conversation about blogs and the Daily Kos that was bizarre to read in a novel. I haven’t read a lot of books where fictional characters are interacting with the same Internet I interact with.

My favorite part of the book is a scene between Corey and his father after a stunning tragedy where the two are sitting at a table eating dinner. Canin shows so much emotion in their dialog and their actions that when I was done reading the scene I had to put the book down and bow down to the mastery of Canin’s writing. I know this is a little vague, but I don’t want to give too much a way. Once you go read the book, which you should do RIGHT NOW, we can discuss this scene and how it’s utter perfectness brought tears to your eyes.

Though Canin is a bit coy with us in the beginning of the novel and withholds some pretty important information until the last third of the book (and it comes off so poorly that I kind of want to ask him what the hell he was thinking with that kind of revelation). If you stick with a dry beginning, you will be handsomely rewarded. Like I said, this is probably going to be the best novel of the year.