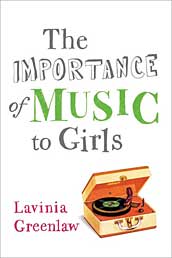 At one point in her book The Importance of Music to Girls Lavinia Greenlaw makes this observation: “I don’t know how to think or how to talk about what I think. I haven’t learned anything for years. I don’t listen. I can’t speak. I am watching myself happening or not happening . . .”

For some reason when I read that passage I immediately thought “AHA! That’s it, that’s the problem.” Because I really, really wanted to love this book and it somehow left me a little cold. Despite some stunning and beautiful writing this memoir feels as though Greenlaw never stopped watching herself happen. It’s almost as though Greenlaw’s poetic prose puts up a wall between her and the reader.

Writing about music is probably the most difficult kind of writing to do. Trying to put concrete words and images to something as abstract as music can drive you crazy, and I think it’s why so much music writing reads like incomprehensible gobbledygook. The very best music writers are able to convey the emotion the music evokes in them to the reader. Either music did not evoke any kind of emotion in her, or Greenlaw’s just not that good at writing about music. It’s probably the latter, because Greenlaw’s a pretty damn good writer. When she writes about dancing, it’s magic. She should have written her entire memoir about dancing.

Despite the title, I never believed that music was really important to Greenlaw. It seemed to be something she did to preoccupy her angst-filled teen years but not some sort of vital lifeblood that she would die without. The music was merely a means by which to define herself, the boys she wanted to date, and the fashions she wore. In fact for someone who claimed to be punk in the 70s in England, she spent more time talking about her hair cut and bondage jeans than she did about any of the music coming out at that time.

The format of the book didn’t do Greenlaw any favors either. It’s told in these whimsical, floaty 2-6 page vignettes that seem to follow each other chronologically, but really don’t have much to do with each other as far as content goes. There is not a strong narrative thread running through each chapter. Really, the only thing that compelled me to continue turning pages was my own hope that the book would start making sense. It’s a little confusing.

The whole thing is so disappointing. It’s not the female answer to Love is a Mix Tape that I was looking for. It’s not even a really great, engaging memoir about growing up in the English countryside. It’s sad, but I enjoyed Greenlaw’s Book Notes essay more than I did the book. Probably because the writing that essay is more concrete and accessible and not all floaty like it is in the book.