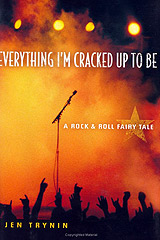 Here’s the thing with rock and roll memoirs (at least this is the thing I’m getting after reading, well, two) stories about playing crowded, smoky clubs all the sound the same after you hear about three of them. Doesn’t matter where the club is, who the band is, or what year it is. Sometimes something quirky happens, but even then it’s not enough to break up the monotony.

That would be my main complaint about Jen Trynin’s Everything I’m Cracked Up to Be, which weighs in at a wrist-straining 350+ pages, a lot of her stories all sound alike. In fact, much of Trynin’s rockstar career can be broken down into three stories:
1. All the big labels wanted me and the big wigs would all fly out to my shows to tell me how much I rocked.
2. After signing I went on the road where I drank and smoked too much and was lonely and felt bad about getting what I wanted.
3. My first record didn’t do well, I freaked out and quit.

I’m oversimplifying a bit, but not much. Even with the frequent bouts of monotony, Everything I’m Cracked Up to Be is a pretty engaging and entertaining read. Trynin does a good job of breaking down what it means to “get signed” and how it’s a miracle any musician makes money on a major label. Between this book and Dan Kennedy’s Rock On I completely understand why record companies are in such dire straits.

Trynin’s got a great conversational writing style which helps the book move along at a pretty good clip, and she’s pretty funny. I even laughed out loud a few times. Once when she had a panic attack in her hotel room and had to call the front desk to find out the date and time. Another time when she found out that Spin had given her record “Cockamamie” a five.

I also liked the way Trynin foreshadows the coming of Alanis Morrisette and what effect that phenomenon had on her career. In fact the whole book is just soaked in that mid-90s vibe. It’s awesome and she should get some mad props for that.

What I liked the most though, was that Trynin’s memoir felt really honest. She was smart from the get go, giving a lot of influential people nicknames, so she never had to reveal who they really were and it worked. In fact, I think I preferred it. Sometimes with so many people flitting in and out of a story it’s hard to keep track of who exactly Derek or Randy or Peg is. But I always knew who she was talking about when she referred to HeadHoncho, had she called him Phil or something it’d have taken me a minute to figure out.

Trynin doesn’t portray herself as a victim or a martyr, just a girl with bad timing which is really quite refreshing.